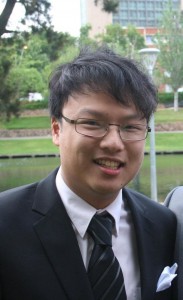 Mr Joule Li is currently a 5th-year medical student who was awarded a 2013/14 University of Adelaide Summer Research Scholarship and a Freemasons Foundation Centre for Men’s Health Extension Scholarship to investigate the association between musculoskeletal pain and obstructive sleep apnoea in males.  The project supervisors were Professor Robert Adams and Associate Professor Catherine Hill from the The Health Observatory.

The Scholarship allowed Joule to continue his research with the FFCMH, having previously investigated health literacy and obstructive sleep apnoea as part of his MBBS Fourth Year Research Elective.  To demonstrate the benefits of getting involved in research as an undergraduate student at the FFCMH, Joule has has achieved the following to date: his research has been published in the March 2014 issue of Sleep, one of the top-ranked journals in sleep medicine research http://www.ncbi.nlm.nih.gov/pubmed/24587580.  His research also won him the 2013 Douglas Hardy Research Project Prize for being the best Research Elective project. In addition, Joule’s personal reflection piece, based on this research, was awarded the prestigious John Snow Scholarship by the Australasian Faculty of Public Health Medicine, and with this Joule has been invited to present at the Royal Australasian College of Physicians Congress in Auckland, New Zealand in May 2014.  Joule was also recently appointed Associate Editor of the Australian Medical Student Journal (http://www.amsj.org/), which is a national peer-reviewed biomedical journal with a readership of over 10,000 medical students around Australia.

“The scholarship program allowed me to learn important epidemiological research skills while simultaneously applying them in an interesting real-life context to further our understanding of sleep apnoea in men”, Joule comments. “The opportunity to learn from such a large multidisciplinary team of researchers and clinicians has also solidified my interest in men’s health and public health, and opened the doors for me to pursue these research interests in my future training and professional career”.

Undergraduate students from any Discipline where there could be application to men’s health (eg social sciences, mathematics, all health sciences, media) interested in participating in research, either throughout the year or as part of a 6 week summer scholarship program, may email the Centre at menshealth@adelaide.edu.au for more information.