Given that Port Power was playing the elimination AFL final against Richmond on the following Sunday, the McLachlan Room at the Adelaide Oval was a fitting venue for the 2014 Men’s Health Business Breakfast on 3 September.   The Breakfast was a sell-out and attendees were rewarded with an absolutely inspiring, entertaining and powerful talk delivered by our guest speaker Mr Jeffrey Kennett AC.

Dr Luke Selth, Post-Doctoral Research Fellow from the Adelaide Prostate Cancer Research Centre opened the breakfast, wished Richmond Football Club good luck, and introduced Dr Roger Sexton AM, Principal Patron of the Freemasons Foundation Centre for Men’s Health. Roger, proudly announced the establishment of the Allen Bolaffi Memorial Fund at Flinders University in honour of Allen who was a Patron of the Centre and a well respected business leader in South Australia.  He then introduced Mr Kennett. 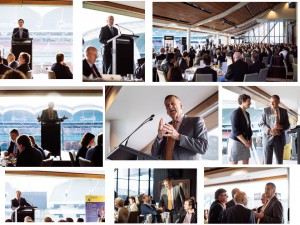 As the sun appeared above the Eastern stand behind him and guests started to tuck into a healthy breakfast developed specifically for the event by Adelaide Oval Executive Chef Hamish Robertson, Mr Kennett started off by reminding the guests that physical and mental health, and life is something that we should be thankful for every day when we wake up.  He continued to captivate his audience as he declared that he is pleased to have left the world of politics behind him and describe his profound passion for Beyondblue, which continues to raise awareness and drive initiatives to address depression and suicide in our community, and of which he is the Founding Chairman.

Mr Kennett presented details of Beyondblue’s NewAccess program being piloted nationally with Medicare Local  (Central Adelaide and Hills Medicare Local and Flinders University in SA)  to provide free support services to individuals who are struggling to deal with day-to-day pressures.

PhD candidate Mrs Clare McGuiness (Psychology) presented Mr Kennett with a thank you gift of a Port Power scarf and Crows beanie which Mr Kennett immediately donated to the respective clubs out of concern for their future financial viability! but he held onto the double malt whisky.  Mr Kennett used the opportunity to highlight the important role of academic and clinical psychologists and other mental health care workers in our community.

Professor Wittert concluded the morning with an overview of the Freemasons Foundation Centre for Men’s Health, its achievements over the last 5 years, its objectives over the next five years and discussed how businesses may get involved.  A prospectus for the Centre may be downloaded from our Website.  The Breakfast was followed by a tour of SAHMRI .

The Centre would particularly like to acknowledge the following organisations and individuals for their Corporate Tables bookings.

We hope to see you at next year’s Breakfast.