Hsp90 inhibitors and their therapeutic potential in prostate cancer 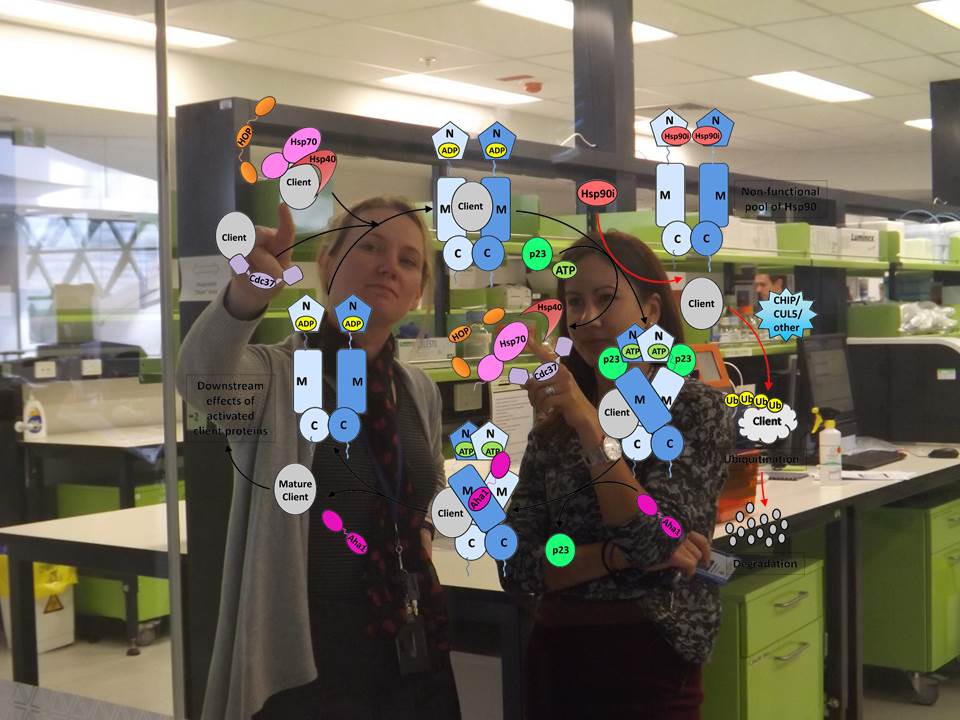 Hsp90 is a key cellular protein required for maintaining the stability and activity of a diverse group of what are known as “client proteins”. These client proteins including protein kinases, transcription factors and steroid hormone receptors which are involved in cell signaling, proliferation and survival, cancer development and progression.  Inhibiting the action of Hsp90 results in degradation of these client proteins. Consequently, drugs which inhibit Hsp90 have demonstrated significant antitumor activity in cell and animal models and have been shown to be selective for cancer over normal cells. Hsp90 is one of the most actively pursued targets by drug discovery groups in both academia and industry, including for prostate cancer.  Unfortunately, in human clinical trials the safety and effectiveness of Hsp90 inhibitors have been sub-optimal.

Heather Armstrong, who is being supervised by Lisa, Margaret and Dr Luke Selth, has dedicated her PhD to enhancing the understanding of Hsp90 action and the cellular consequences of inhibiting it, which may underlie treatment response or resistance. This review article describes the recent progress that has been made in the study of Hsp90 and its inhibitors, and makes key recommendations for further study of these agents to improve their efficacy.   Heather is receiving a PhD scholarship top-up from the FFCMH.  What has been shown is that in certain cancer types, such as prostate cancer, Hsp90 inhibition is less effective despite having Hsp90 clientele.  There remains, however, a focus on its role in such cancers as HER2+ breast cancer and non-small cell lung carcinoma.

This entry was posted in Research and tagged PhD, prostate cancer, therapeutics. Bookmark the permalink.