The Centre was honoured to have His Excellency, the Honourable Hieu Van Le AC, Governor of South Australia, visit the Centre on Monday 24 April at the Freemasons Hall, in Adelaide. 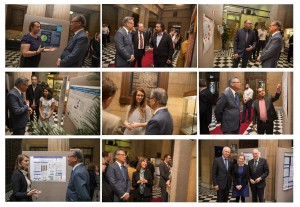 His Excellency became Patron in Chief of the Centre in early 2016. He used this visit to talk to students and early career researchers about their research – on depression, prostate cancer, chronic disease, health services and vulnerable populations. This was to give His Excellency a taste of the range of activity and approaches to men’s health and highlight our biggest asset – the quality of people who work, collaborate and study with the Centre.

The Patron visit was also to meet with members of the Board of Patrons, and the Management Group and previous Tall Poppy awardees and Centre Researchers Drs Luke Selth and Camille Short, to be briefed on the Centre’s activities and recent achievements.

The event was held at the Freemasons Hall where the plaque, unveiled by Rear Admiral Kevin John Scarce, the former Governor of South Australia, commemorating the establishment of the unique 10 year partnership between the Freemasons Foundation, Freemasons SA/NT and the University of Adelaide, is proudly displayed. 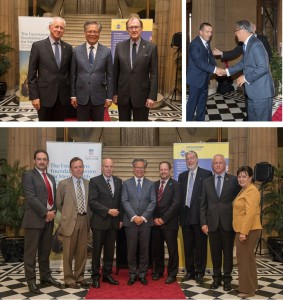 Prof Wittert highlighted that the programs of the Centre address some of the biggest health issues facing men which include Type 2 diabetes, cardiovascular disease, depression, prostate cancer, and other lower urinary tract, sexual, and reproductive disorders.

Prof Wittert noted that these are conditions that are pivotal to address, to ensure healthy and productive ageing and to mitigate the direct and indirect costs of an elderly, frail and dependent population. He reiterated that a sex-specific approach is crucial to achieve this.  Also our programs focus on the most disadvantaged men, which are those living in rural and remote areas and Aboriginal and Torres Strait Islander men.

He went on to say that the researchers in the centre continue to make significant contributions at a time when it has never been more difficult to obtain research funding and where ensuring the ongoing integrity and productivity of the Centre is of paramount concern. He stated “Nevertheless, as we enter the second decade of operation we will face, with the encouragement and support of our Patrons, and hopefully the ongoing support of the Foundation and the University, the challenge of broadening our activities to young men’s health, fathering, and closer engagement with industry to promote healthier work forces.”

This entry was posted in Events, News, Research and tagged Board of Patrons, Governor, His Excellency, Vice-Regal. Bookmark the permalink.