Where are they now? Associate Professor James Smith 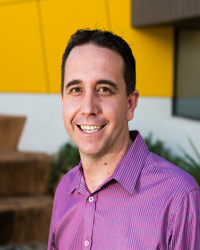 Associate Professor James Smith is a 2017 Equity Fellow with the National Centre for Student Equity in Higher Education hosted by the Office of Pro Vice Chancellor – Indigenous Leadership (OPVC-IL) at Charles Darwin University (CDU). He is also the Co-Lead of the Indigenous Leadership Research and Evaluation Network at CDU.  James completed his PhD in Public Health and Medicine at the University of Adelaide at the time the Freemasons Foundation Centre for Men’s Health was being established (James- left of photo below). 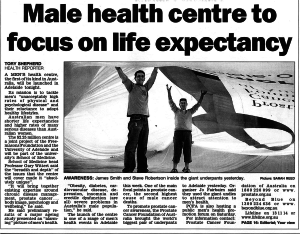 James was an Affiliate Member with FFCMH when working with SA Health at the time. The Freemasons Foundation funded his men’s health policy study tour of the UK and Ireland through the Trevor Prescott Memorial Scholarship.  James went on to complete some seminal work in men’s help seeking and health service engagement practice.  His work formed the basis of Andrology Australia guidelines for GPs on communicating with men in primary care. He has and continues to play an important role in the development and updates to Australia’s National Male Health Policy.

In his current role at CDU he is examining ways to strengthen evaluation in Indigenous higher education contexts in Australia. Prior to this role he was the Program Manager for the Whole of Community Engagement initiative at CDU, which involved building the aspirations of remote Indigenous communities to pursue higher education. He has also held other senior management and executive roles in both government and non-government contexts, in urban and remote settings across the NT. This has included roles in health planning, alcohol and other drugs, health promotion, integrated service delivery and change management.

James has won a range of accolades for his work in Indigenous education, research, health promotion, health policy, community engagement and men’s health. This includes the 2016 CDU Vice Chancellor’s Award for Exceptional Performance in Research (Emerging Researcher); 2016 Australian Rural Education Award from the Society of the Provision of Rural Education; 2012 Aileen Plant Medal awarded by four peak professional national population health bodies; and 2011 NT Young Manager of the Year by the Australian Institute of Management.

James volunteers on the Board of Melaleuca Refugee Centre and the Heart Foundation (NT Division). He is the Chair of the Community Advisory Committee for the NHMRC funded NT Data-Linkage project; and Deputy Chair of the Community Advisory Council of the NT Primary Health Network. He is a Fellow and former Board Director of the Australian Health Promotion Association (AHPA) Ltd. James is also an Associate Editor of the Health Promotion Journal of Australia and the International Journal of Men’s Health; and Consulting Editor for the Australian and International Journal of Rural Education.

He is married to Brooke, and has four children, Cameron, April, Dominic and Pippa.