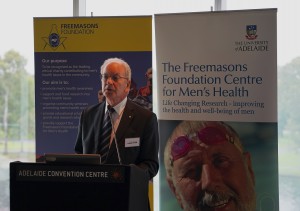 Dr Roger Sexton AM (pictured left), Principal Patron and Chair of the Board of Patrons of the Freemasons Foundation Centre for Men’s Health welcomed more than 90 Centre members and guests to the Panorama Suite at the Adelaide Convention Centre on Nov 17 to formally celebrate the 10 year anniversary of the Centre and the unique research partnership between the Freemasons Foundation and the University of Adelaide.

Dr Sexton acknowledged four people who were the masterminds of the Centre and who continue to support the FFCMH; Dr Greg Levenston, current Patron and former Grand Master of  the United Grand Lodge of NSW jurisdiction, who travelled from NSW to attend the event, Sir Eric Neal AC former Governor of South Australian and inaugural Principal Patron, Robert Clyne OAM Executive Director of the Freemasons Foundation, and Professor Mike Brooks, current acting Vice Chancellor of the University. 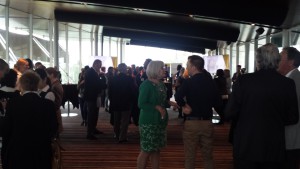 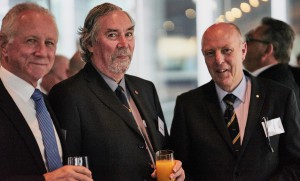 Also attending was Chairman of the Freemasons Foundation Inc, Mr Andrew Lathlean JP (pictured above with Richard Num and Robert Clyne) and Dr Vanessa Glennon, past Senior Executive Manager of the Centre who took the Centre from strength to strength, and also one of the Centre’s initial Fellows Dr Eleanor Need.

The recently elected incoming Grand Master of Freemasons SA/NT and Patron of the Centre, Dr Neil Jensen then spoke to congratulate the Centre and The University of Adelaide for the milestone reached and, more importantly the impact it has made in men’s health over the last 10 years.  Dr Jensen spoke about love and charity being at the heart of what it means to be a Freemason, and that the Centre is a proud example of this in action.  As the incoming Grand Master, Dr Jensen who is a General Practitioner, said he looked forward to Freemasons SA/NT’s ongoing research partnership with the University and further building on the strong foundation set in the first 10 years.

Also attending the event was the Hon Tony Piccolo MP, member for Light, who has been a tireless Patron of the Centre since it was established.  We thank Tony for acknowledging the Centre’s milestone in his speech to the House of Assembly of SA Parliament on Wednesday 15 November, 2017.(Extract from Hansard, Page Number 12105)