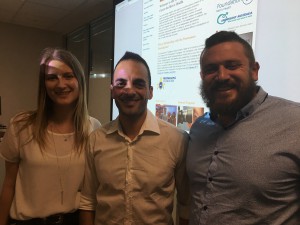 Congratulations to the Centre’s three honours scholarship students who were all awarded first class honours.

Mr Simon Tyler (right in picture), supervised by Dr Sean Martin and Dr Phillip Tully, used data from the Florey Adelaide Male Ageing Study (FAMAS) to drill down on the associations between the two type of lower urinary tract symptoms (LUTS) (voiding LUTS and storage LUTS) and the two domains of depression (physical/or somatic depression and cognitive/or affective depression). He concluded that, given the prevalence of LUTS in men aged 35 or older and the associations across both types and domains of LUTS and depression, there are important opportunities for screening for both during men’s health consultations.

Ms Megan McIntosh is a Paddy O’Rourke Honours scholarship awardee. She was supervised by Dr Camille Short, and undertook a series of qualitative interviews with men on active surveillance for prostate cancer to inform support care services.  Receiving their PSA tests before their follow-up appointment were important to men to help manage uncertainty. Men were open to and accepting of physical activity prescription recognising the physical and psychological benefits. They felt that a group setting remains important for such given that current on-line support  is but not always sufficient.

Mr John Fouyaxis,  supervised by Dr Camille Short and Dr Niranjan Bidargaddi, analysed data from a digital APP (Reach Out website) that young people elect to download to support them during times of mental health distress. The APP relies on ecological momentary assessments, asking the user to respond to a prompt asking them to rate their mood and match this to other data that can be collected. John’s research drew on psychological theories to explain motivation and habit-forming behaviours that resulted in non-adherence to the APP which may then be incorporated into updates to enhance the utility of the program.