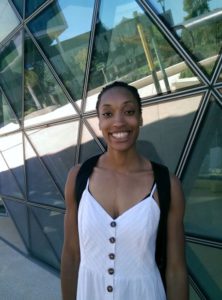 The Centre welcomes Dr Layla Guscoth, who has joined the FFCMH as a Visiting Lecturer.  Layla is based with the Clinical and Population Health Research Group at SAHMRI.

No doubt netball and Adelaide Thunderbirds followers will know Layla, who is the Thunderbirds star import player for the 2019 season. Layla plays at the highest level of netball in England and is on the national team.

Layla is also an Oxford University Medical Sciences graduate and was awarded her Bachelor of Medicine and Bachelor of Surgery with Distinction from University College London.  She is now a Registrar, in the National Health Service, currently at Southmead Hospital, Bristol.

While here in Adelaide, Layla is breaking up her heavy netball schedule by doing some research, and further developing her skills in doing so, to take back to UK.  Layla hopes to specialise in nephrology. Layla has therefore teamed up with the MAILES male cohort research group, and in particular Dr Sarah Appleton and Dr Sean Martin, to interrogate the MAILES dataset to address gaps in knowledge around kidney health in men.

We wish Layla and the Thunderbirds all the best for the season and for her time here in Adelaide.