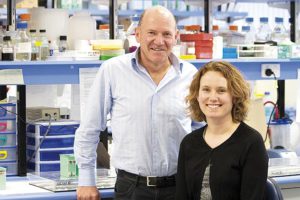 In 2010 Professors Wayne Tilley and Lisa Buter (pictured left) and Dr Maggie Centenera from the Dame Roma Mitchell Cancer Research Laboratories of the FFCMH joined an international team from Thomas Jefferson University, the University of Michigan and University of Texas South Western Medical Centre (USA) for a
research program which ultimately described for the first time how a gene (unit of DNA ) called PARP-1 known to be involved in DNA repair, interacts with the androgen receptor, a protein that plays a pivotal role in driving prostate cancer. Lisa Butler was, at the time, being supported by a Fellowship funded by the Cancer Council and the FFCMH. 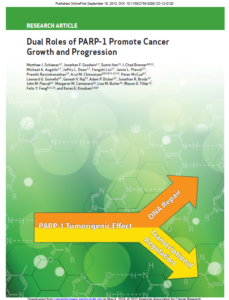 A seminal paper (left) was published in 2012 in Cancer Discovery, a leading journal in the field of cancer, describing the research that involved multiple experimental models. The research, that has been cited in the biomedical literature 193 times concluded that inhibiting action of this PARP-1 gene is likely to influence androgen receptor function and therefore prostate cancer. The FFCMH arm of the collaboration examined this interaction using a human prostate tumor model that they developed and is now used world-wide.

Arising from this and subsequent international research, drugs that inhibit the action of PARP-1 have been developed
for prostate cancer. Early stage clinical trials testing these drugs in prostate cancer began in late 2017 and 2018 and continue to recruit men, including a recent trial that has begun in Adelaide.  These trials are testing whether PARP-1 inhibitors, one of which is called “olaparib”, increase overall survival in men with prostate cancer who are no longer responding to standard treatments. There are some early encouraging results from these trials.