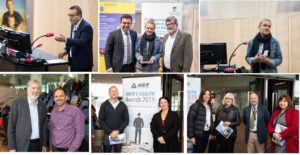 On June 13, during Men’s Health Week, the Centre hosted the Australian Men’s Health Forum’s SA Men’s Health Awards at which the SA Men’s Health Report card was released and community organisations across South Australia working to advance the health and well-being of men and boys were acknowledged and celebrated.  A number of these organisations were represented and spoke about their work during the awards.

CEO of AMHF Glen Poole said that while the report cards highlight that there was still much to do in men’s health, there is a lot to celebrate in terms of Australia taking the lead to advance the health and well-being of boys and men.  He referred to the fact that Men’s Sheds, which provides an important social network for men, now has more Sheds (1000+) than there are McDonald’s outlets across Australia.  Australia also has a National Men’s Health Strategy and is one of only a handful of countries in the world which does.  The Strategy 2020-2030, released by Minister Greg Hunt in April this year, is the second Men’s Health Strategy.  The release coincided with the release of the Women’s Health Strategy that shows a commitment by the Commonwealth to a sex specific approach to advancing the health and well-being of men,women and children.  Movember also originated out of Australia and is now a global organisation supporting men and boys health and well being with a particular focus on mental health, testicular cancer and prostate cancer.   Glen Poole spoke of the importance of strong partnerships between organisations working more in the social sector and academic groups working in the biomedical sector, such as the Freemasons Foundation Centre for Men’s Health.  This has traditionally been weak but the AHMF are working hard to strengthening the network to facilitate evidence based approaches, implementation of initiatives, and a mutual respect of the strong influence of social determinants in health and health outcomes.  A transcript of Glen’s talk will be available shortly

The Hon Tony Piccolo MP (member for Light) spoke about his passion for men’s health as a father, as a member for Light, and as a Patron of the Freemasons Foundation Centre for Men’s Health.  He thanked those organisations in his electorate of Light for their dedication to men’s health and well-bing, including Willos Men’s Shed, the Northern Communities Men’s Wellbeing Network, and Anglicare SA.

There were a record number of nominations for the SA Men’s Health Awards this year.  The finalists were Hart Well-being, The Rite Journey and Rotary Wellness Campaign with the Rotary Wellness Campaign receiving the award from Dr Richard Harvey MP (Member for Newland).  In accepting the award Jo Clark from the Rotary Men’s Wellness Campaign gave a heartwarming overview of their work taking a photographic exhibition of 30 men from across Eyre Peninsula through towns to highlight men’s mental health, educate and inform men about resources and services available, and work at removing the stigma around talking about mental health issues.

For more information about the awards given across the country go to www.amhf.org.au/awards.