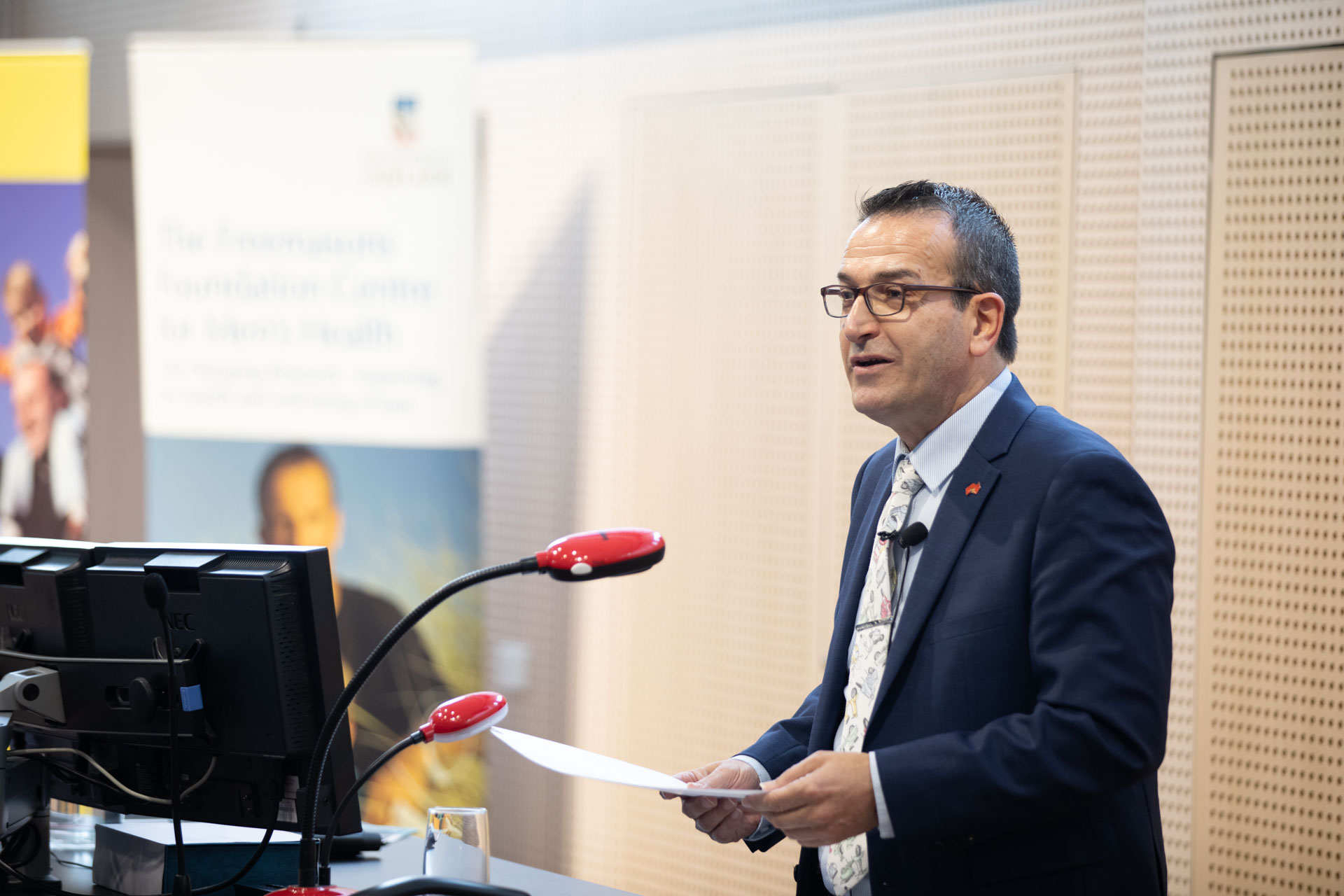 The Hon Tony Piccolo MP (Member for Light) has been a passionate and committed member of the Board of Patrons of the Freemasons Foundation Centre for Men’s Health since the Centre’s inception.  Tony recently spoke about the Centre and the organisations in his community working to advance men’s health and wellbeing at the SA Men’s Health awards during Men’s Health week. He followed this up in his speech to SA Parliament on 2 July.  See Hansard extract below.

The Hon. A. PICCOLO (Light) (15:21): Today, I would like to speak briefly about a couple of things. First, I would like to speak about a recent event, the Men’s Health Awards, held during Men’s Health Week. I attended the awards, and I would like to acknowledge that Dr Harvey, the member for Newland, was also present on behalf of the government. The awards are sponsored by the Australian Men’s Health Forum, a national organisation that seeks to bring together the various men’s health groups across the nation to improve the health of men and boys in Australia.

A couple of the messages that came from that event included, as is the case in most countries of the world, that we are starting to understand that the most effective way to address both women’s and men’s health is by a sex-specific approach that recognises differences. In April this year, the commonwealth government released a men’s health strategy and a women’s health strategy for the next 10 years that recognises the need for this sex-specific approach to make inroads, particularly in the area of young men’s health, depression and chronic disease.

First, it is important we understand and acknowledge that supporting men in their social environment is important for their health and wellbeing, and so we need to better understand how men are faring in our communities. There is a whole range of ways that a number of community organisations support men in their communities. In my own community of Light, for example, we have Willo’s Men’s Shed, one of the many men’s sheds across the country that provide a lot of support for men in their community, offering them the opportunity to gather and talk about men’s issues but that also offer a safe place for men to discuss issues of concern to them. Each men’s shed right across the country is quite different, reflecting the nature of those communities.

Also in my electorate, I would like to acknowledge the work undertaken by John Goodger and his team at Anglicare SA, who coordinate the Northern Men’s Wellbeing Network, which champions men’s health and wellbeing, particularly for dads and children, in the Playford region. Organisations such as this are important at the local level as they create the right setting for conversations about the elements that make men healthy in the communities in which they live.

The decline in manufacturing and other traditional blue-collar employment has displaced many men from the workforce, leading to considerable stress on men and their families in my region, and the network helps to provide the support these men need. Networks such as this also place great effort on ensuring that their efforts are inclusive and reflect the needs of men right across the community, including young men, Indigenous men and men from emerging cultural communities.

So, Mr Speaker, when you go out to the countryside and go past a Masonic lodge, you should acknowledge that there are people behind the scenes raising funds for important works like men’s health. Professor Wittert, who is the Director of the Men’s Health Centre at the University of Adelaide, leads a team of researchers and scientists who do important work. Their work is having an impact right across the world because their research is leading the area of men’s health nationally and internationally.

I also acknowledge the contribution of Mr Robert Clyne OAM, the Foundation’s Executive Director, for his role in establishing the Centre and its ongoing success. I also mention the fact that the Centre is undertaking what is called the MAILES study, which stands for Men Androgen Inflammation Lifestyle Environment and Stress, which is one of the most comprehensive longitudinal studies of men’s health and wellbeing regarding ageing. This is being undertaken in the northern and western suburbs of Adelaide. This research is critical to informing the practice of better service delivery to men and boys in our community. Healthy men and healthy young boys mean we have healthy families and healthy communities.

This entry was posted in News and tagged Board of Patrons, Freemasonry, men's health. community, parliament. Bookmark the permalink.