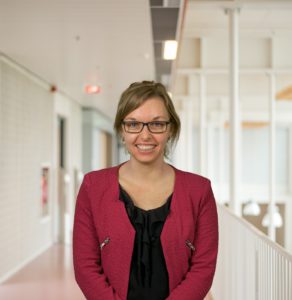 The Centre welcomes Rianne de Heus who is visiting the FFCMH from The Netherlands to work as postdoctoral research fellow for 6 weeks. During her stay at the FFCMH, Rianne is working with Dr Phillip Tully to explore the association between blood pressure variability and brain health, especially dementia and cognitive impairment. It was recently demonstrated that instability in blood pressure over time (i.e. fluctuation and wide variation) is important for the prediction of cardiovascular diseases and stroke. Rianne is researching whether high variability in blood pressure increases the risk of developing dementia and cognitive decline; combining datasets from around the world as part of the VARIABLE BRAIN, COSMIC and IALSA consortia. Rianne will be based in SAHMRI for the next 5 weeks, after which she will continue working on this project in the Netherlands.

Rianne is supported by an Alzheimer’s Netherlands Foundation post-doctoral fellowship. Rianne is based at the Radboud University and Medical Center in Nijmegen, The Netherlands. She recently completed her doctoral thesis and expects to have the public defense of her work in June 2020. During her PhD, Rianne studied the role of blood pressure and cerebral blood flow in older people with cognitive impairment and dementia. Rianne investigated whether high variability in blood pressure is also a factor involved in cognitive impairment. She showed, amongst others, that higher visit-to-visit and day-to-day blood pressure variability is associated with an increased rate of cognitive and functional decline in older people with Alzheimer’s disease. This week her latest paper was published, looking at the association between cerebral small vessel disease and day-to-day blood pressure variability: https://content.iospress.com/articles/journal-of-alzheimers-disease/jad191134