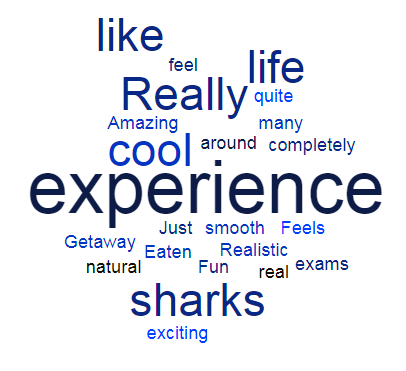 Virtual realities can give us learning opportunities we have never had before. The extra dimension provides an environment that we can take advantage of, however we need to think about it and ask ourselves questions such as ‘why’ and ‘how’.

Focus on learning should always come first so that the technology fits the learning objectives (and this is true of any technology). To help discussions I have designed a hierarchy of important points to consider. Let’s explore the layers: 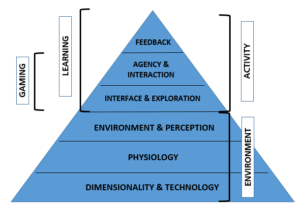 Dimensionality & Technology: It is important to understand why VR is being used in the first place and what form of VR is being considered. The 3rd dimension should be fully used and taken advantage of, and the learning should need this 3rd dimension otherwise it doesn’t necessarily need VR. Maybe it is just the fun and engagement element you’re after? Or maybe you’d like an experience that students can’t normally get to in the real world. In terms of technological options, the VR spectrum goes from 360 degree video through to fully immersive experiences where you can interact with objects. If your experience can be deployed on consumer headsets that are relatively cheap, it can reach more students, although functionality may be more limited than the higher end expensive headsets that can drive the more immersive experiences.

Physiology: In short, VR can make people feel motion sickness or activate anxieties due to the realness of the experiences. Unless these are an inherent part of the learning experience, they should be avoided at all costs. This can be done by such measures as always ensuring the user has full control of movement, or limiting sideways or vertical movement. If movement is to occur without the user’s control, an indication of upcoming movement (such as an arrow) can reduce any motion sickness feelings. Also, an artificial horizon can also help if the horizon is not immediately apparent.

Environment & Perception: Our real world environment is made up of cues for all of our senses, and sight, sound and touch are relevant to VR design. It’s important to construct the learning environment in a way that the brain is used to seeing, and this is based on perspective. Sight and sound both have perspective and direction and these need to be designed in to the environment so that it appears real and authentic. If high-end volumetric environments are being designed, this will have implications for hardware to handle binaural sound for example, and also for time spent in the design phase. Lower-end headsets and designs won’t be able to handle this as well, but 360 video would provide basic visual perception and direction so may be a better choice in this situation.

Interface & Exploration: The 3rd dimension implies that learners will be able to move around within the environment. This can be in the form of selecting scenes to hyperlink into (like a 3D webpage), or using a controller to indicate where to move to within a space. The interface needs to provide indications for how to do this, and can be as simple as a reticle that shows where the gaze is directed, allowing elements within the scene to be selected. Other elements of the interface can show controls that select tools, vary scale, or other useful movement or action controls that float in mid air, or act as a HUD (head up display) for example. Nielsen’s design heuristics may be valuable here, as the same principles that underpin good interface design for websites can also be used within virtual environments.

Agency & Interaction: The 3D immersive environment supports learners actually DOing and manipulating – that is, object and situation-based learning. For 360 video, this may mean that even if the student cannot interact with the environment, that they are tasked with observing the environment that will help with a task outside of VR. If the setup has an augmented reality (AR) overlay, then the students can begin interacting with the environment by selecting hotspots with the reticle and uncovering more information – this would be good for orientation purposes. Full volumetric environments allow for control and manipulation of objects using a hand controller or glove. All of these actions need to be designed to achieve and support learning, and so instructional design considerations come into play, that is ‘why does the student need to do this?’, or ‘how does this support later assessment?’

Feedback: Feedback is extremely important for learning. In VR environments, agency, action and feedback are similar to learning where a master is teaching an apprentice because there is that immediate situational feedback. This capacity requires the system to measure what the student is actually doing, and this may be beyond most systems, although the ability is improving. Tracking user movement, action and gaze is becoming more prevalent with current technologies. This invites the designer to think about the analytics that can be collected, which can provide information that can be fed back to the learner and also used as an in situ assessment. The benefit is that a learner can repeat a situation until they achieve a certain standard.

The VR Design Hierarchy is a handy tool that helps us think about the important aspects of designing learning for virtual reality technologies. We recognise that there is a spectrum of technologies, ranging from low-end 360 images or video, right up to full volumetric experiences that give the user full interaction and manipulation of the environment. ALL layers are important. The hierarchy intends that the base layers need consideration for the upper layers to work effectively.

This entry was posted in Teaching and Learning and tagged active learning, virtual reality, VR. Bookmark the permalink.