A new approach to a proven initiative: Using technology to provide a fresh, service-driven approach to small group student learning 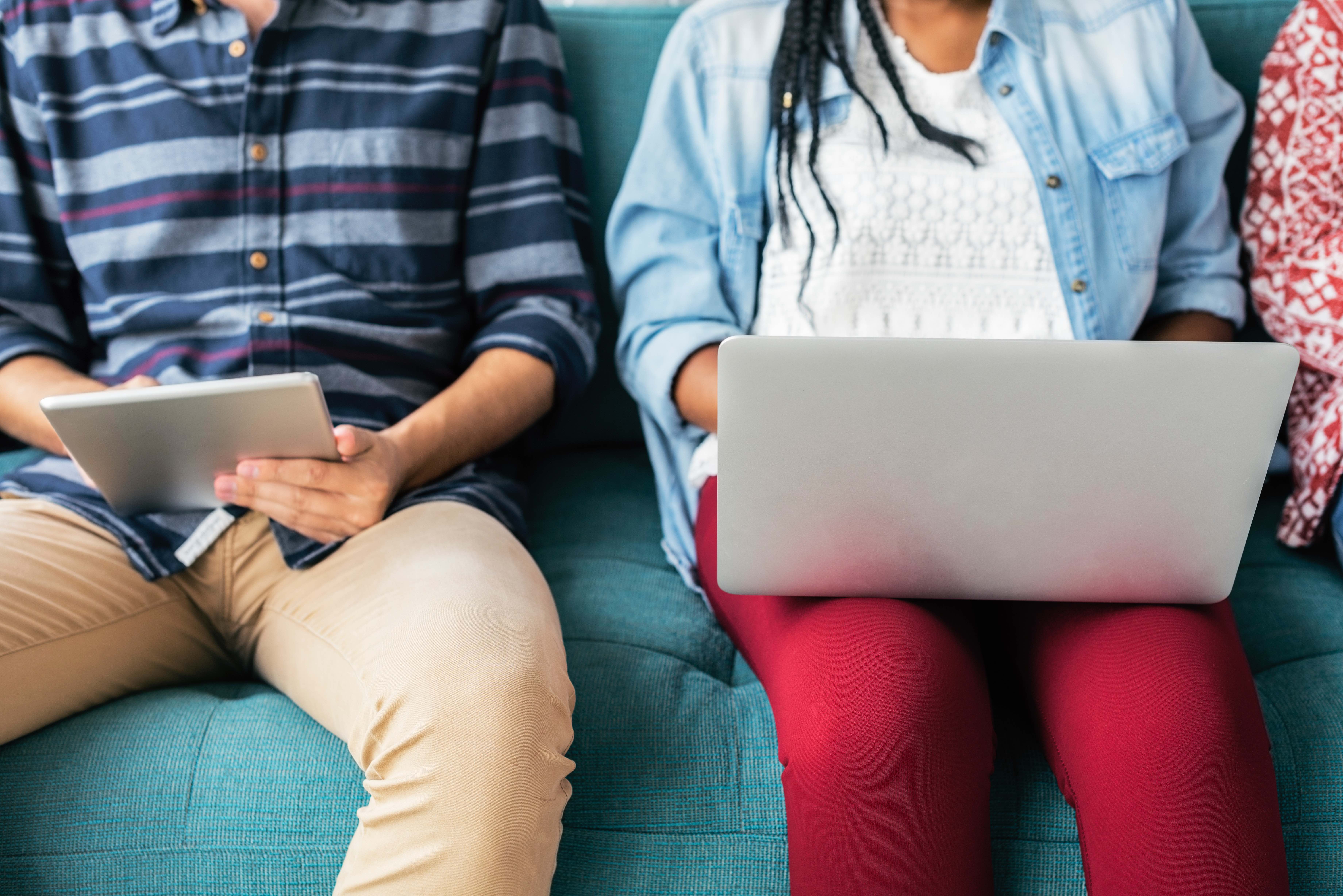 A Q&A with Dr Chelsea Avard and Oliwia Derda

The LEI grant project was to trial an online delivery of the Peer Assisted Study Sessions (PASS). The original PASS model has been delivered successfully in a face-to-face format and is primarily aimed at assisting first year coursework students in their transition into University. The benefits of the face-to-face PASS program have already been proven but Dr Chelsea Avard wanted to pilot an online version of the program to test its viability and effectiveness.

One of the main reasons for trialling an online delivery was to make the program accessible to a wider cohort of students who were unable to attend face-to-face sessions. There was also a focus on students transitioning from the North Terrace campus to the Waite campus, which has been known to be a tough transition for students.

The PASS online pilot program was delivered through the Echo360 platform and rolled out to support Faculty of Science students in the first-year course STATS 1004 Statistical Practices I (Life Sciences). This particular course is taught on the North Terrace campus. Students who take this course typically go on to study at the Waite campus in their second year. The reason for selecting this course in the PASS online pilot program was to assist in creating a seamless transition for students from campus to campus.

We spoke to Academic PASS Coordinator, Dr Chelsea Avard  and student PASS Leader, Oliwia Derda on their involvement in the project, their findings, and how this project has evolved.

What was your main motivation for wanting to get involved in the project?

Academic Voice, Dr Chelsea Avard:
I took over as PASS Coordinator at the beginning of 2018, and the previous coordinator had left a note in 2017’s annual report recommendations to look into running PASS online. I had been thinking of ways to investigate the possibilities for this but was working with a very tight budget. In the meantime, I had become involved with a steering committee, whose focus was on supporting the university’s Peer Leaders, and through that committee met an academic from Waite who was looking for ways to help connect new students to continuing students. How to connect Waite to the PASS program was another issue I had been investigating, so when the LEI grants came up it seemed like a perfect fit to give us both financial and tech support to develop a pilot project to test the possibilities for running PASS online, in a way that would, in this case, enable senior students based at Waite the chance to be PASS Leaders, and connect the 2018 first year cohort (who would be based mainly at Waite in 2019) to their future campus.

What was your role in the project?

Academic Voice, Dr Chelsea Avard:
As PASS Coordinator, my role focussed on identifying senior students in the Viticulture and Oenology degree based at Waite who would be good candidates for PASS Leadership, and training them in the facilitation of PASS, organising extra training for them to support them in using Echo360 and other online technologies, and assessing how the program was going across the semester.

Student Voice, Oliwia Derda:
During our pilot PASS project I was in charge of the content delivery for the students, as a designated PASS Leader. I liaised with the course coordinator and the students to prepare activates and tasks that helped the students get more out of their course.

What was the most surprising outcome/discovery from the PASS pilot program?

Academic Voice, Dr Chelsea Avard:
The most surprising aspect for me was that some students would log on to the session externally, and remain connected throughout the hour but without contributing to the discussion. This is something that will need to be addressed when we run our second pilot in Semester Two 2019. The other thing that surprised me was how well the PASS Leaders and those attending students who did participate in the discussion were able to form a productive relationship, of the kind that forms between PASS Leaders who facilitate in-person sessions and their attending groups of students.

Student Voice, Oliwia Derda:
It was a first time for the PASS program at Adelaide Uni to run sessions online. Therefore, before the start of the program I was concerned over not being able to establish a connection between the PASS leaders and students. However, what surprised me the most was the flexibility of the program structure that allowed the leaders to create collaborative learning space through an Internet connection.

How did the online delivery of the PASS program differ from the original face-to-face delivery?

Academic Voice, Dr Chelsea Avard:
From my observation, the main difference between the online delivery of PASS and the traditional in-person version is that the PASS Leaders needed to work even harder to avoid the session falling into a ‘passive’ learning mode, with students ‘receiving’ information from them, rather than engaging in discussion amongst themselves. In a face to face session, PASS Leaders can make use of room arrangement and their own place within it to equalise and democratise interactions, avoiding positioning themselves as teacher. Delivering PASS Online from Waite campus to (mainly) students on North Terrace campus made this difficult at times, in part because the PASS Leaders role was elevated and enlarged, literally, by their being projected onto the screen at the front of the room. This again is something to think about for future iterations.

Student Voice, Oliwia Derda:
A traditional PASS session involves a 50-minute face-to-face session with a designated leader. The new pilot PASS program involved running the PASS same session completely online. This removed the physical contact between the PASS leader and the students, allowing for a more flexible delivery method, where students could access the session from any location. All that was required was a spare hour, Internet connection and willingness to learn.

What was the best part of using Echo360 to deliver online support? And the most challenging part?

Academic Voice, Dr Chelsea Avard:
From my observation, the best parts of using Echo360 were that students were already somewhat familiar with the framework, and the virtual classroom gave the PASS Leaders a range of helpful tools with which to engage the students. The most challenging parts were the risk of encouraging passive learning, as I mentioned earlier, and the lack of a tool for two-way verbal discussion. This was dealt with by the PASS Leaders using a mixture of Echo360 and Zoom, which, though borne out of necessity, ended up being quite a successful approach.

Student Voice, Oliwia Derda:
The best part of using Echo360 was the in-build quiz templates and activities. This allowed us to create a range of fun and interesting sessions for the students. In addition, this function was also extremely useful for the problem-solving questions associated with learning statistics. The most challenging part of was the adaptability of the program to the needs of the students. However, we were able to overcome it by being very flexible and patient, allowing us to create a content delivery method that best suited the students and the program leaders.

How did the program help for those transitioning from 1st Year at North Terrace campus to 2nd year at Waite?

Academic Voice, Chelsea Avard:
The PASS Leaders were selected in consultation with a senior academic from Waite, who recommended a number of students who had excelled in the STATS 1004 courses being supported, as well as in their later courses in the degree that took them to Waite. One of these was keen to come on board and completed the mid-year PASS training/application process. The other PASS Leader was someone who had been through the application/training process at the beginning of the year and who had experience with the STATS 1004 course. PASS requires leaders to have taken the course they are supporting as a student themselves, and to maintain a GPA of 6. Beyond this, we look for students who have not only excelled in their courses but demonstrate an understanding of how and why they did so, and therefore not only what and how to study for that course, but what other students might struggle with. We are looking for people who are successful, love studying, and have a drive to help others do the same.

What are the benefits of using students to lead these sessions rather than academic staff?

Academic Voice, Dr Chelsea Avard:
There are a range of benefits when it comes to students rather than academic staff leading sessions such as these. PASS Leaders have direct and recent experience of what it is to be a student studying the specific course receiving PASS support. This gives them an understanding both of the way the course works as a whole/how it connects to later courses, etc. and of what it felt like to not know that yet, to be learning about core concepts as they came along week by week. Alongside this central factor, there are other benefits such as students often being more likely to ask the kind of question they might not yet be comfortable asking a lecturer or tutor (here also the PASS Leader can offer some encouragement/reassure students that it is okay to approach academic staff), and also that PASS Leaders can offer a modelof being a successful student.

Student Voice, Oliwia Derda:
The academic staff is best suited in delivering the course content as being the experts in the field. However, experienced students who previously performed well in the course, best know and understand what topics can be most challenging for the students. The role of a PASS leader is not to re-teach the content theory, but to guide students through the course by helping them to answer their own questions using material available to them.

Based on the outcomes from the pilot program, are you planning on implementing any changes to the online PASS model going forward?

Academic Voice, Dr Chelsea Avard:
Yes. Whilst we’re not running PASS Online in the first semester of 2019, we are looking to run a second pilot program in Semester Two, utilising a conference speaker in the North Terrace room to avoid some of the tech issues we had last semester, working with a mix of Zoom and Echo360 from the beginning of the semester, and focussing more on engaging those students logging in to the session externally as opposed to those on the North Terrace campus.

What is the process for those academics who are wanting to include their courses in a future PASS program?

Academic Voice, Dr Chelsea Avard:
Course Coordinators can go to the PASS Website for further details and/or contact me directly at chelsea.avard@adelaide.edu.auto enquire about organising PASS support for their courses.

Want to know more about the PASS program?

Academic Voice, Dr Chelsea Avard
Dr Chelsea Avard is the Peer Assisted Study Sessions (PASS) Coordinator at The University of Adelaide. Chelsea’s research and teaching background is in English, Creative Writing and the broader Humanities. More recently, Chelsea has worked extensively in the area of transition, retention and academic skills support. She has a particular interest in collaborative work that brings together staff and students from across the University.

Student Voice, Oliwia Derda
Oliwia is a Master of Teaching student at the University of Adelaide and a PASS Leader for Statistics. She has a love of science and innovation. Her future aspirations are to help high school students to overcome their doubts and stimulate their engagement in learning. She is also keen to motivate young women to pursue careers in STEM fields and industries.