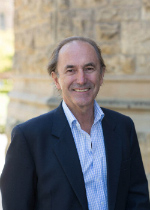 Professor Mike Young holds a Research Chair in Water and Environmental Policy at the University of Adelaide’s Centre for Global Food & Resources. He is also an Honorary Professor with the University College London, a member of the University of Alberta’s Water Initiative External Advisory Board, a Fellow of the Academy of Social Sciences in Australia and a Distinguished Fellow of the Australian Agricultural & Resource Economics Society. He is currently writing a book on the design of robust water entitlement and allocation regimes.

Mike is best known for his contribution to the development of natural resource and environmental policies.  In recent times, his research has focused on the use and design of market-based instruments with attention to water. He has played a critical role in the consideration of options for the Murray Darling Basin.  Internationally, he is known for his capacity to integrate biophysical and economic information to produce innovative policy proposals that catalyse change.

Mike’s past career experiences have included:

In 2003, Mike was awarded the Centenary Medal “for outstanding service through environmental economics”. In 2006, he was awarded Australia’s premier water research prize – the Land and Water Australia Eureka Award for Water Research; this award recognised the significant contribution of his research with the late Jim McColl to the development of improved water entitlement, allocation and trading systems in Australia. In 2009, he was named South Australian of the Year in the Environment Category.

Mike’s curriculum vitae lists over 240 publications.  He is a past Associate Editor of Ecological Economics and is currently a member of twelve editorial boards.  He holds degrees in economics and agricultural science.

More information about Mike is available at www.myoung.net.au.