Last week, the University of Adelaide’s Public Law and Policy Research Unit and the Indo-Pacific Governance Research Centre were very pleased to host Professor Sarah Birch from the University of Glasgow. Professor Birch is a leading international scholar in electoral integrity, and the author of Full Participation: A Comparative Study of Compulsory Voting (2009).

Professor Birch came to the University of Adelaide to present new research into compulsory first-time voting. She presented with Professor Lisa Hill from the University of Adelaide. Professor Hill is a leading international scholar on compulsory voting, and the co-author of Compulsory Voting: For and Against (2014). The abstracts for their papers are below. The seminar was also filmed as part of the Indo-Pacific Governance Research Centre’s Seminar Series, and is available here.

Professor Sarah Birch: Compulsory First-Time Voting in the United Kingdom
This paper reviews the problem of declining turnout in democracies (with particular focus on the UK) and proposes as a solution a system whereby each elector would be legally obliged to vote in the first election for which they were eligible. Popular attitudes toward first-time compulsory voting are measured and probed by means of UK survey data from 2013. The main findings of the paper are that first-time compulsory voting is a politically and administratively feasible proposal that commands the tentative support of a wide swathe of the population and has the potential to help address a number of the problems associated with declining turnout, and in particularly low rates of electoral participation among younger citizens.

Professor Lisa Hill: Compulsory Voting for First Time Voters in Britain: Hazards and Lessons from Australia
Compulsory voting for first time voters in Britain is a good idea that will doubtless help ameliorate the turnout problem it currently experiences. But, despite significant levels of approval for the practice, public resistance to compulsory voting remains a major obstacle to its introduction in the UK. Once introduced, the most important task will be to generate and maintain the public’s tolerance. Without this acceptance, compliance and satisfaction will be low.

In this paper I reflect on how prospective adopters of compulsory voting can overcome public skepticism about the practice. The Australian system offers a useful case study for how best to implement and manage a compulsory voting regime.  It will be shown that, in terms of both compliance and public approval, compulsory voting works best where it is effectively and uniformly administered by electoral offices with high levels of demonstrable and perceived integrity; where electoral outcomes are accepted as legitimate; where sanctions are applied consistently but without zealotry; and where the state meets the imposed obligation with a commitment to making voting as costless as possible. All these conditions are met in the Australian case and certainly either are or could be in the UK. It is also suggested that compulsory voting, when managed properly, can itself generate such conditions.

A problem with which Australian electoral authorities are currently grappling—rising rates of informality—would also need to be addressed preemptively. Unintentional informal voting can be dealt with via educational programs while intentional informality can be addressed by providing ballots with meaningful and legal exit options such as “None-of-the Above’ and protest mechanisms. Electoral education that stresses voting as a duty would also be effective. 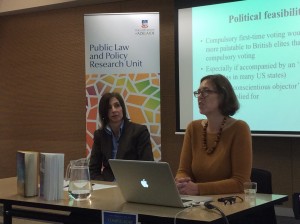