On 18 February 2015 Professor Melissa Hart from the University of Colorado Law School visted the Adelaide Law School as part of the Faculty of the Professions’ “Aim for the Stars” program.

Professor Hart gave a seminar on Colorado’s Judicial Ethics Advisory Board and Commission on Judicial Performance. The Hon. John Doyle AC QC provided commentary from an Australian perspective. The seminar was attended by members of the Public Law and Policy Research Unit (PLPRU), representatives from government and members of the profession. Below is an outline of Professor Hart’s seminar.

Colorado has a very robust system for selecting, evaluating, educating/advising, and disciplining (where necessary) the members of the state judiciary.  This system includes a merit-based selection process, required judicial education for which financial support is available, a Judicial Ethics Advisory Board to counsel judges with questions about the ethics rules, a Commission on Judicial Performance that conducts regular performance evaluations, and a Commission on Judicial Discipline that hears complaints and, where appropriate, recommends sanctions (with a wide range of sanctions available).  Despite this multi-faceted system, public perception that judges are not “accountable” dominates discussion about the effectiveness of our judiciary and the public seems to have decreasing confidence in the courts.  Why is this and what can we do about it? 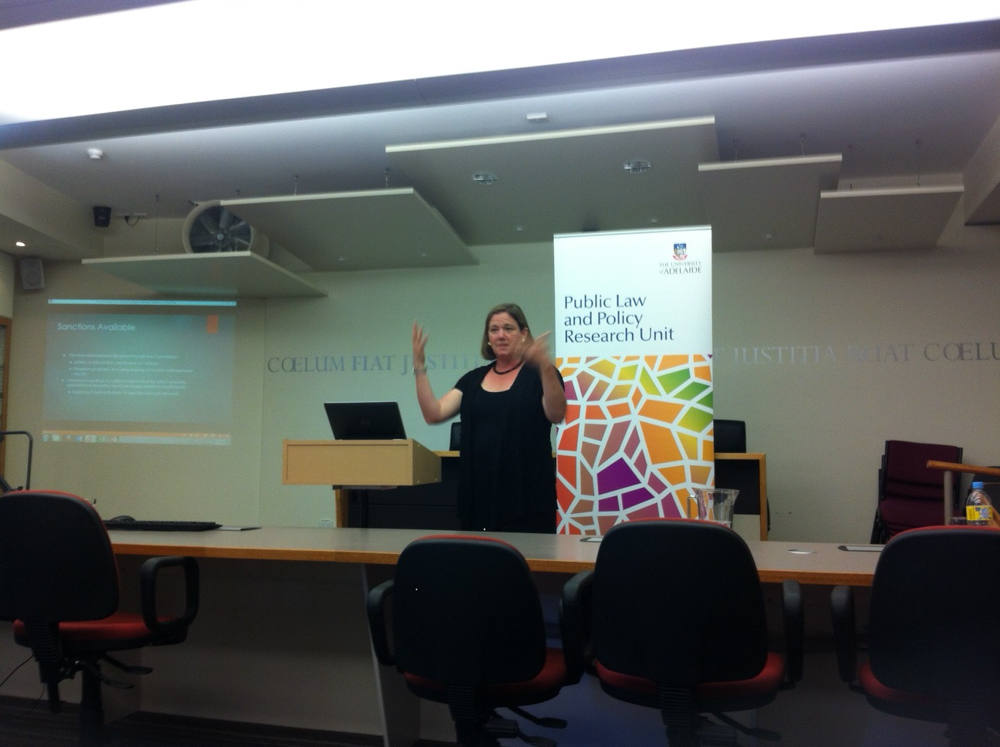 Colorado’s system for selecting judges was established by amendment of the Colorado Constitution in 1966.  The system, which is referred to as merit-based selection starts with interested attorneys applying for a judgeship when a vacancy opens on a court.  This process happens for every level of court, from District Court to Supreme Court.  I am using the Supreme Court process as an example here.  Applications are submitted to a Nominating Commission, intentionally made up of a diverse group of 7 lawyers and 8 lay people; 5 democrats, 5 republicans, and 5 unaffiliated; 2 members from each of the 7 congressional districts and 1 at-large.  That diversity is intended to involve non-lawyers and to ensure that the system isn’t taken over by one political group or by a narrow faction.  The nominating commission interviews the top applicants and then selects three names to send to the governor.  The governor must select one of the three.

Once a justice is selected by the governor, he sits for a two year provisional term, after which he stands for a non-partisan, uncontested retention election.  Although the justice’s name will be placed on the regular election ballot, the judge may not campaign.  (The one exception to this is if an organized campaign against his retention is registered with the Secretary of State.  This is extremely rare; it has occurred only a handful of times in 50 years.  Even then, the justice himself does not campaign, but a committee in support of his retention can campaign on his behalf.)  After the initial retention election, the justice will serve 10-year terms, with a retention election every 10 years.  The mandatory age for retirement is 72.  The goal for this merit selection/uncontested, non-partisan retention election system is to find some balance between judicial independence and accountability.

In 1988, after this system had been in place for 20 years, the Colorado legislature authorized the creation of Judicial Performance Commissions to operate in concert with the retention election system. The purpose of judicial performance evaluations is to provide fair, responsible, and constructive evaluation to educate voters and to provide judges with information to help improve their professional skills. Performance commissions use a variety of tools — surveys of lawyers, litigants, and other judges; courtroom observation; analysis of written work and administrative performance; and interviews with the judges themselves.
An important element of the evaluation system is clarity about what the judges are being evaluated on — what are the qualities that define good performance as a judge?  Under the Colorado system, the qualities for which the judges are being evaluated are integrity, legal knowledge, communication skills, judicial temperament, administrative performance, and service to the public and the profession.  Part of the value of focusing on these qualities explicitly is that it helps to define what judges are supposed to be accountable to — the law and their judicial responsibilities.

These systems of selection and evaluation are partnered in Colorado with two very different bodies that assist with regulation of judicial ethics and judicial conduct.  The 10 member Commission on Judicial Discipline includes 2 county court judges, 2 district court judges, 2 senior lawyers, and 4 lay people.  The Commission is authorized to investigate complaints that it receives as well as to initiate its own investigations.  Grounds for disciplinary action by the Commission include

When a Commission investigation leads to a conclusion that a sanctionable conduct has occurred, the Commission can impose a private sanction, such as a reprimand or requirement to participate in training.  Alternatively, the Commission can recommend formal sanctions, in which case the matter is referred to the Colorado Supreme Court.  If, after a hearing, the Supreme Court determines that removal from office is warranted, the judge will be removed.

Finally, the Judicial Ethics Advisory Board (JEAB) is an 11-member Board appointed by the Justices of the Colorado Supreme Court to offer ethical guidance to judges.  The Board includes judges, lawyers and at least one layperson member at any given time.  Judges with ethical questions present them to the Board and the Board publishing opinions addressing those ethical concerns that Board members determine warrant public response.   The opinions that judges request range from straightforward interpretations of the Code of Judicial Conduct to policy judgments about the appropriate interplay among the Code, state law, and federal law.  The Board does not possess formal disciplinary authority over judges, but is designed instead to offer ethical guidance to judges who are seeking to comply with their obligations in contexts presenting uncertainty.

Despite this fairly robust system of judicial selection, evaluation, and regulation, public confidence in the judiciary seems to remain low.  One of the central goals of these systems was to increase public confidence by specifically including non-lawyer/non-judge participation and offering neutral evaluations targeted to the judicial skills for which judges should be held accountable.  At the same time, the system seeks to promote judicial independence and fairness by avoiding the drift to an elected judiciary, which has occurred in many of the US states.  The Colorado system’s limited success in increasing public confidence raises a question about whether the causes of public distrust of judges can be addressed through a focus on the quality of judges.  If not, how is it possible to increase public confidence?