Posted on September 2, 2015 by Jessica Douglas 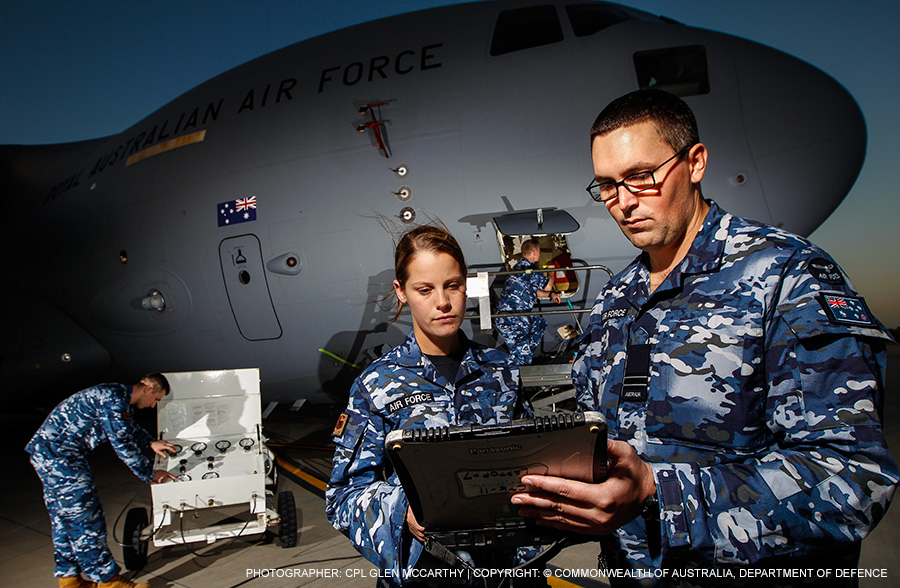 The days of Australia’s defence forces routinely deconstructing major equipment to visually inspect for corrosion could soon be over, saving huge amounts of time and money, and possibly even lives.

In a world first, researchers at the University of Adelaide’s Institute for Photonics and Advanced Sensing (IPAS) have developed a unique form of optic fibre that can be coated with flurometric corrosion-sensing material—another world-first technique—and embedded throughout the critical structures of aircraft and ships.

Co-lead researcher Professor Heike Ebendorff-Heidepriem says this means a fighter jet’s wings, for example, could be checked for the early signs of corrosion in a matter of seconds, with no deconstruction required, then be immediately returned to action.

“We’d been working on training light along tiny ‘nano-rail’ fibres threaded through liquids, structures or other mediums as detectors for several years,” says Heike.

“The light in the nano-rails isn’t contained, as it is in standard broadband-Internet optical fibres, but rather is guided along an exposed core, and can interact with surrounding materials to reveal their secrets.

“The Defence Science and Technology Group (DSTG) asked us to work collaboratively wit them to develop these fibres to detect corrosion in the harsh environments which Defence’s aircraft and ships are exposed to.”

According to Heike, the breakthrough came when co-lead researcher Roman Kostecki developed the world’s first exposed-core optic fibre made from silica.

“This made it sturdy enough for use outside the lab, and allowed us to start applying the technology to real-world problems.”

The team subsequently developed a unique method of coating the fibres with chemicals that respond when light comes into contact with any nearby corrosion by-products, enabling near-instant checks to be conducted by firing lasers along the fibres.

“We’ve already successfully checked for aluminium ions in aircraft-grade materials—the first time that’s ever been done with optical fibres—so we’re very excited to keep expanding the technique’s applications in conjunction with the DSTG.

“It has fantastic potential to create safer aircraft, ships, and even critical structures like bridges, which could ultimately contribute to saving lives.”