Posted on September 17, 2015 by Jessica Douglas 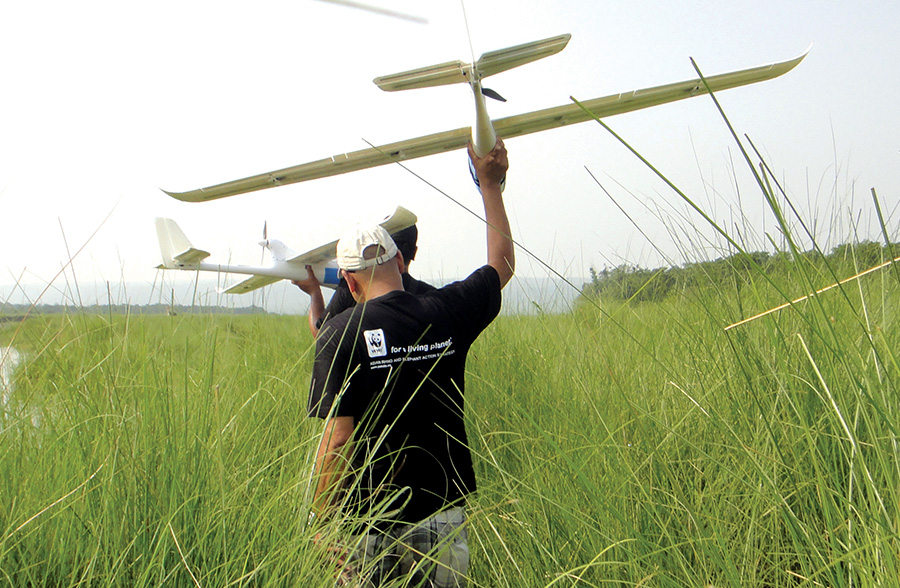 Wildlife and environmental conservation is a challenge wherever it occurs, but particularly so in tropical developing countries. With rapid deforestation, poaching and the spread of agriculture and industry, the need is high. Yet funds are scarce, distances vast and terrain often difficult, if not impossible to negotiate by foot or car. Research by University of Adelaide Associate Professor Lian Pin Koh, however, is providing a solution.

For the past few years, Dr Koh, Chair of Applied Ecology and Conservation in the University’s Environment Institute, has been investigating the development and use of low-cost unmanned aerial vehicles (UAVs), or “drones”, for conservation-related applications. His work has not only proven the idea viable but, through his not-for-profit organisation ConservationDrones.org, is already making a significant difference to the effectiveness of conservation efforts worldwide.

“The idea first came to me in 2011,” said Dr Koh. “I was discussing the challenges of wildlife conservation in Southeast Asia with a colleague, Serge Wich [Liverpool John Moores University], and we wondered if UAVs might be an option.

“We quickly discovered most commercially-available UAVs were too expensive for conservation groups in developing countries, though. So we decided to develop our own low-cost drone specifically for the task.”

Their first prototype – remarkably produced for less than AUD$2,000 – was tested in February 2012. Over four days in North Sumatra, it collected thousands of high quality images of forests and wildlife. Word spread, and they were soon overwhelmed with interest from peers and press. They co-founded ConservationDrones.org just two months later and have since expanded it into a worldwide initiative.

“We’ve now conducted hundreds of successful flights and trained dozens of conservation workers [in the use of UAVs] across many countries, including Indonesia, Malaysia, India, Congo, Madagascar and more.

“Our machines can be fitted with all sorts of camera systems, including thermal imaging. We can even use the images to produce three-dimensional models of the terrain.”
Dr Koh said a particularly valuable feature of the drones was that they could be programmed to fly very close to forest canopies. This had enabled researchers to detect elusive orangutans, elephants, rhinoceros, forest buffalo and turtle nests.

“All photos are also tagged with GPS coordinates,” he explained, “which has given authorities the ability to prosecute illegal loggers, and spot poachers’ distant campfires.”

A key research focus for Dr Koh was to now expand the impact of this technology. “I’ve recently established an Unmanned Research Aircraft Facility here at the University. This provides a ‘coalescing node’ for information exchange among environmental scientists, natural resource managers, and conservation practitioners in South Australia.

“One of the first projects I’m involved with through the facility is the development of a drone to radio-track Australian wildlife, such as wombats, wallabies and bilbies. This will help identify where species are located, their habitats and how to protect them against threats.”