Posted on September 1, 2017 by Jessica Douglas 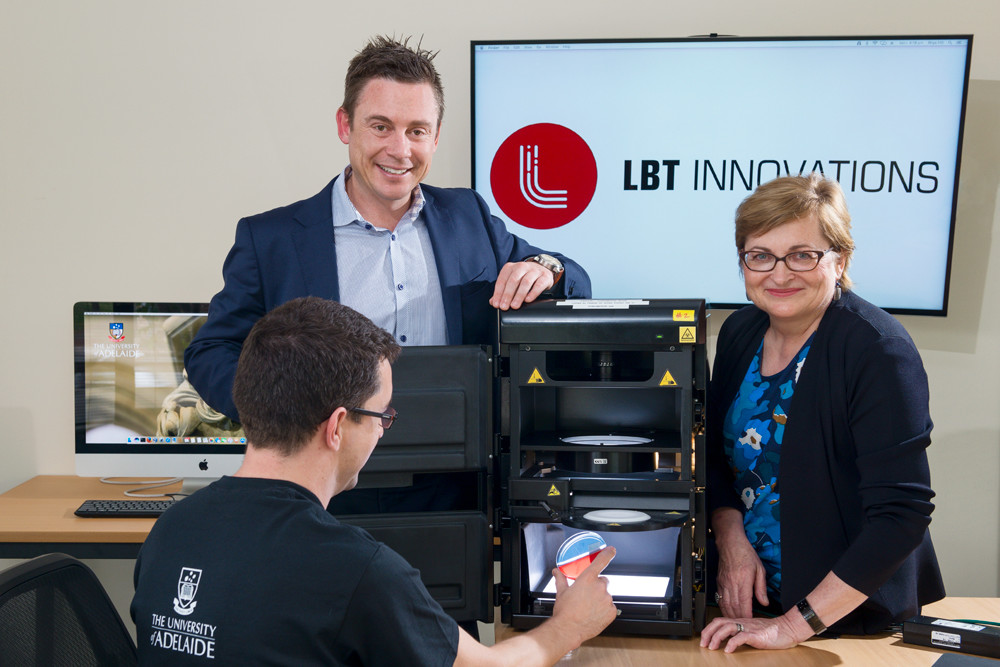 A collaboration between the University of Adelaide’s Australian Centre for Visual Technologies (ACVT) and Adelaide-based LBT Innovations (LBT) has given humanity a powerful new weapon in the fight against infectious disease.

Together, the joint project team has developed the world’s first artificial intelligence (AI) technology for the automation of microbiology screening in pathology laboratories.

Set to commence production in 2017 after receiving US Food and Drug Administration (FDA) approval in October, the Automated Plate Assessment System (APAS) promises to dramatically increase the speed of patient diagnosis and treatment.

According to LBT CEO Brent Barnes, that could mean faster recovery for millions. “The science we’ve put into practice through APAS with the University of Adelaide could well become part of hospital protocols all over the world,” says Brent. “Countless patients will reap the benefits.”

ACVT Director Professor Anton van den Hengel, who led the University’s six-person software development team, agrees. “Doctors will be able to order more tests, which will give them more information, sooner,” he says.

“APAS could even allow country or military hospitals to run their own tests without having to ship samples to a central lab. That would save a huge amount of time, and potentially many lives.”

APAS automates the traditionally time-consuming functions performed by microbiologists in screening culture plates after incubation. It takes high-quality images of the plates, then analyses and interprets any microbial growth, matches this against key patient data, and presents a diagnosis.

Significantly, APAS then also removes all non-pathogenic plates from the workflow. “This is very important,” adds co-founder of LBT Innovations, Lusia Guthrie. “In routine microbiology testing, up to 70% of plates may be negative. So having to deal with them slows down microbiologists’ ability to address the plates that do contain disease-causing bacteria.”

The success of APAS is considered by both project parties to provide tangible evidence of the enormous potential of university-industry collaborations. Particularly effective in this case, says Lusia, was the “embedding” of an ACVT computer scientist on-site with the LBT development team.

“Anton originally appointed Rhys Hill to assist us here with proof-of-principle research,” she says. “It worked so well—particularly in terms of communication flow—that Rhys stayed with us throughout prototype development and right up to FDA compliance.”

“Embedding Rhys was critical to the project’s success,” agrees Anton. “It meant LBT always had someone on-hand who deeply understood not only the technology, but the broader area of AI and what it could do.”

Keen to build on the foundation laid with APAS, the University and LBT are now jointly developing three other related medical devices utilising the ACVT’s AI image-analysis technology, including a hand-held device to assist in the management of wounds.

“Our work with the University of Adelaide has taken LBT to a new level,” says Lusia, now Chair of Clever Culture Systems, the Joint Venture company that will bring APAS to market.

“We’ve transitioned from a ‘robotics company’ to an ‘AI company’, and now we have the opportunity to become a ‘digital health company’.

“Our partnership with Anton and the ACVT is key.”