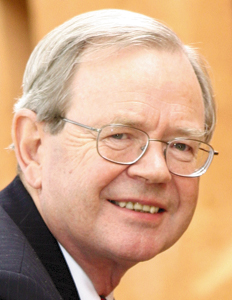 Hon John von Doussa is a Former Chancellor of the University of Adelaide and President of the Human Rights and Equal Opportunity Commission.

Mr von Doussa became the 14th Chancellor of the University of Adelaide in 2004. From 2003-2008 he served as President of the Australian Human Rights and Equal Opportunity Commission, having been a Judge of the Federal Court of Australia since 1988.