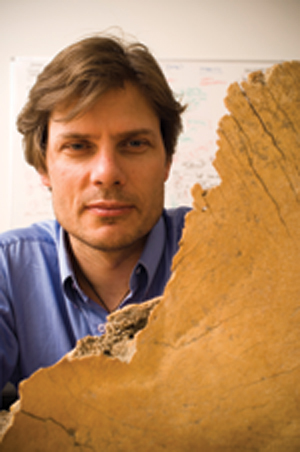 Professor Alan Cooper is a Federation Fellow within the School of Earth and Environmental Sciences, Director of the Australian Centre for Ancient DNA (ACAD) and an expert in the field of ancient DNA and molecular evolution.

Originally from New Zealand, his research career has led him from UC Berkeley to Oxford University. His fieldwork involves digging up extinct species from caves or permafrost deposits, or in the backrooms of museums, and has taken him to Hawaii, Madagascar, Patagonia, Siberia and the Yukon Territory.

Professor Cooper specialises in using ancient DNA to record and study evolutionary processes in real time, especially those associated with environmental change. His work ranges over timescales of hundreds of years old (eg museum specimens) to material well beyond the ca. 60 kyr range of carbon-dating, such as permafrost-preserved bones of mammals and sediment dating to >300 kyr. His research is characterised by multi-disciplinary approaches involving the combination of information from areas such as geology, archaeology, anthropology, and even forensics to provide novel views of evolution, population genetics and palaeoecology. Recent research highlights include the use of Ice Age mammal populations to record the effects of environmental change, the first complete mitochondrial genome sequences of any extinct species (two New Zealand moas), and the study of how evolutionary rates change over time.

Professor Cooper’s current research features studies of Australian megafaunal species, permafrost preserved material from the Arctic and Antarctic, ancient human DNA (modern human, Neandertals and Flores hominids), and DNA from sedimentary deposits (marine, terrestrial and freshwater). He is also heavily involved in developing new molecular biology techniques to both improve the ability to recover DNA from the past (eg nuclear genomes, mass sequencing approaches), and to analyse the authenticity of aDNA data. This involves recording how DNA is damaged over time, and the effects on retrieved sequence information (which is relevant for forensics work). Current fieldwork areas include Australia, Beringia and North America, South America, South Africa, China and New Zealand.
A further major research theme concerns the use of molecular clocks to estimate the timing of past evolutionary events. Recent work with ancient DNA data suggests that evolutionary rates may change according to the time period over which they are measured, and has major implications for our ability to date recent evolutionary events.