Science Stories: Caring for very sick babies: how can we know when to let them go? 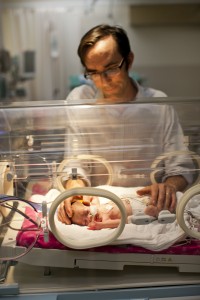 Described in an independent review as ‘a unique and invaluable contribution to the literature on paediatric decision-making’, a new book by the Robinson Institute’s Dominic Wilkinson was officially launched this week prior to the Perinatal Society of Australia and New Zealand Congress in Adelaide.

‘Death or Disability? The ‘Carmentis Machine’ and decision-making for critically ill children’ fills a clear gap in the field of perinatal ethics: how can we help doctors and parents facing difficult decisions regarding survival outcomes for very ill children? In a nutshell, how can caregivers decide when it is OK to let a child die?

For Dominic, a practising physician specialising in newborn intensive care and medical ethics, publishing the book has been the result of several years of work and analysis.

“Health professionals working in this field are constantly faced with very profound philosophical and ethical questions, and often it can be deeply unclear what is best for a very ill child.  I hope this book can help doctors and parents think through these situations in an informed and ethically appropriate way,” he said.

Children born very prematurely or after a difficult delivery can face multiple serious health problems in the short term. Even if they survive these challenges, important areas of the brain can be permanently damaged during those touch-and-go early days, resulting in devastating and irreversible mental and physical disabilities.  Such disabilities bring significant challenges to the affected individual as well as parents, extended families and society at large.

Although technologies such as magnetic resonance imaging (MRI) performed during the neonatal period can give an indication of brain damage and the likely disabilities that will result, it can be very difficult to know what to do with that information on a case-by-case basis. Currently there are no clear guidelines in place to assist doctors and parents make informed decisions as to whether children with very severe brain damage should be supported and kept alive, or allowed to die by stopping medical interventions.

Dominic’s book aims to assist clinicians by offering a framework that they can use to systematically work through decisions about treatment for critically ill children.

Dominic wrote his new book following research conducted during PhD studies under the guidance of well-known ethicist Julian Savulescu at The Oxford Centre for Neuroethics, Oxford UK.  The research started by asking the basic question: how well are we able to predict the health outcomes of children based on their neonatal MRI scan results? Dominic then analysed ethical arguments around different approaches to decisions. He used this research to propose thresholds, or points of acceptability, for deciding when to medically support the lives of brain-damaged children.

“Often in these situations, there is no single right answer”, said Dominic “but there are definitely some wrong answers”.

“This is exactly why we need a framework in place: to make sure in each case informed decisions can be made which are acceptable to parents as caregivers, and acceptable to doctors as medical practitioners with a duty of care.”

The decisions also need to sit within a broader framework of what society views as appropriate.

The established thresholds fall into three main categories. In situations where a relatively mild degree of disability is anticipated, doctors should be obligated to do whatever they can to provide life support to the child. At the other end of the extreme, when very severe disability is certain, it may be unreasonable and harmful to the child to continue life support.  In the grey area in the middle, doctors and parents may work together to reach decisions regarding the best interests of the child and his or her family based on likely medical outcomes.

Dominic now hopes to use his book as a starting point to create new guidelines for doctors caring for critically ill children in South Australia.

In addition, he has the needs of parents very firmly in mind. Whereas in Roman times parents concerned for the futures of their children would consult the priestess Carmentis for prophecies (hence the title of Dominic’s book), in the current era decision-making is not so simple. Parents of very ill babies grapple with complex medical information at a time of high emotional stress, and must make decisions that will affect them and their children forever.

“Very little is written for parents about end-of-life decisions in the perinatal period,” said Dominic.

“We can improve the care of babies and their parents by helping mothers and fathers make informed and comfortable decisions in the period immediately after birth”.

Dominic is working on a handbook to help support parents facing these fraught decisions.

The 17th Annual Congress of the Perinatal Society of Australia and New Zealand, addressing Controversies in Perinatal Care, met April 14-17 2013 in Adelaide, South Australia.  As well as launching his book pre-Congress, Dominic facilitated a Robinson Institute/University of Adelaide symposium Perinatal Ethics: Critical questions at the start of life.

Find out more about the book and where to purchase