A new angle for fighting infection and preventing harmful side effects 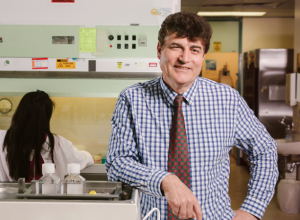 We’ve all experienced the debilitating symptoms of infection. Shaking, shivering, bone aches and high fevers are the side effects of small hormone-like molecules produced by our immune system while fighting disease.

When high levels of a particular molecule known as TNF are induced during some infections, side effects can include extreme pain, disability and even death. Head of the Robinson Institute’s Developmental Genetic Immunology Group, Professor Tony Ferrante has spent his 30-year career investigating how to offer therapeutic tools relating to TNF and its wanted and unwanted actions. A serendipitous discovery during 2012 may have taken him one step closer.

Tumour necrosis factor, or TNF, is a small hormone-like molecule produced by cells of the immune system in response to infection and inflammation. This protein has an incredibly strong potency within the human body. Whilst some of this activity aides infection recovery, other aspects are very damaging to health. The negative effects of TNF include suppressed appetite, wasting of body tissues, fever, shock-like syndromes and the classic symptoms of infl ammation: heat, swelling, redness, pain and loss of function.

The ‘dark’ and ‘light’ sides of TNF’s activities have plagued immunologist Tony Ferrante throughout his 30-year career working in diagnostics and inflammatory conditions. As head of the Robinson Institute’s Developmental Genetic Immunology Group, Tony knows how critical TNF can be in resolving infections, but has also seen the side effects.

“The old adage ‘you need the illness to fight the infection’ certainly holds true in many cases,” said Tony.

“But TNF often takes it one step too far. Yes, it’s a molecule which is critical to fi ght infections, but it can also tip the balance over into infl ammatory syndromes which are highly dangerous and end up being a separate problem to the actual infection.”

“Malaria is a good example, where the excessive production of TNF helps to fight infection but also leads to very high fever, inflammation and lysis of red blood cells, which can eventually kill the patient independently of the actual parasite burden,” added Tony.

TNF acts on several cell types in a very targeted manner, binding to specific TNF-receptors that trigger a cascade of other effects through the activation of intracellular signalling pathways.

The two contrasting arms of TNF have limited the development of any effective targeted clinical treatments relating to its actions. Blocking the unwanted effects through preventing receptor binding also prevents the wanted effects being activated. From the other angle, trying to help patients clear infectious pathogens by treating with TNF is not possible due to the risk of triggering dangerous side effects.

“It’s a dual-edged sword, and a source of great frustration for scientists and clinicians,” said Tony.

Hence Tony was delighted when during 2012 some serendipitous research opened up a new possibility of solving this dilemma.

Scientists in Tony’s lab made several fragments of the TNF-receptor, and tested their capacity to bind to TNF. One of these fragments had special properties that attracted their attention.

“We found that this particular fragment bound to a key region on free-floating TNF. Although the fragment-TNF complex could then still bind to TNF receptors in cell membranes, it somehow changed the activation pathways that were induced,” said Tony.

Tony and his colleagues tested the impact of the fragment on disease outcomes, measure of inflammation and intracellular signalling in mice.

“We think that this fragment blocks the capacity of TNF to activate an intracellular signal known as p38, whilst maintaining the activation of the other important pathways,” explained Tony.

The p38 signal is associated with amplification of inflammatory and cell death biological responses in cells.

The possibility that the fragment-TNF complex may trigger only the wanted biological effects of TNF, and not the dangerous side effects, could have applications in therapy. For example, treating infections with the fragment could lead to maintenance of disease-clearing immune activity whilst blocking excessive, symptomatic infl ammation.

For now though, it’s still early days. With initial grant support for this work from Australia’s NHMRC, Tony has now applied for additional funding to extend the work “to explore pharmacokinetics and looking at the chemical and physical nature of the fragment-TNF complex,” said Tony.

“This line of research could address a problem that has vexed us for many years.”

“The possibility that it could lead to the development of safe and selective treatments not only for chronic inflammatory condition but also inflammation associated with infection is very exciting,” he smiled.