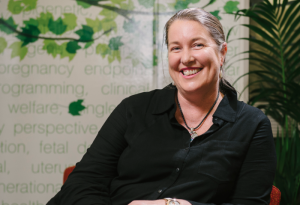 As head of the Robinson Institute’s Pregnancy and Development Group, Associate Professor Vicki Clifton is concerned about the impact that under-diagnosed and poorly treated maternal asthma is having on fetal health, including an increased incidence of stillbirth. To help combat this, in 2012 Vicki announced the launch of Australia’s fi rst dedicated asthma service for pregnant women.

Being pregnant places many demands on a woman’s body. Extra weight along with expanded blood volume and higher metabolic rate all contribute to the physiological burden of pregnancy. Lung function also changes during pregnancy, with conditions such as asthma often worsening and causing respiratory diffi culties. It is now clear that in addition to troubling the woman, increased incidence and severity of asthma during pregnancy can create serious health issues for her child, including growth restriction, preterm delivery and even stillbirth.

Associate Professor Vicki Clifton, head of the Robinson Institute’s Pregnancy and Development Group, is committed to preventing the negative impacts of asthma during pregnancy. In 2012 she announced the launch of Australia’s fi rst dedicated asthma service for pregnant women.

“Unfortunately, asthma has been poorly treated during pregnancy for many years,” said Vicki.

“Currently there is no dedicated asthma service for pregnant women in Australia, and government funding is not forthcoming to support a trial to determine the cost effectiveness and clinical effectiveness of such a service.”

“We will run a trial service in 2013 on a limited budget, because we believe this is an extremely important initiative to change clinical practice and help a large proportion of pregnant women in Australia,” she said. Vicki’s drive to initiate the trial service stems from her extensive research experience, and her knowledge of the statistics relating to asthma during pregnancy. According to data collected by SA Health, asthma complicates up to 16% of pregnancies in South Australia, and is a significant contributing factor in up to one fifth of preterm births, stillbirths and delivery of growth-restricted fetuses in this state. Asthma is also associated with other serious complications of pregnancy, such as preeclampsia, gestational diabetes, haemorrhage and congenital abnormalities.

Despite these statistics, less than half of the cases of asthma in pregnancy are currently identified. To complicate the picture further, even if aware of their condition, women show some reluctance to use their normal asthma medications when pregnant.

“Asthma is being under-reported during antenatal visits and is therefore undertreated,” said Vicki.

“There is also a misconception with pregnant women that their asthma medication may harm the baby. In fact, the asthma is much more likely to be harmful than the preventive medicine,” she says.

“There needs to be more awareness around the management of asthma during pregnancy and the importance of taking preventive medication while pregnant.”

In the past, Vicki has conducted a number of research projects on the impact of asthma on mothers and their babies, and in 2013 she will take up a new five-year research fellowship focussed on this work, funded by the National Health and Medical Research Council (NHMRC).

“We now have more information than ever before about how and why asthma worsens during pregnancy, and why it can have such a detrimental effect on the baby, but much more research needs to be done,” she says.

In addition to conducting further research, Vicki emphasises the need to see improvements in clinical practice.

“By introducing a dedicated asthma service, we hope to raise awareness of the problems experienced by mothers and their unborn babies from asthma, and provide treatment and advice,” she explained.

“Ultimately, with the right care and management, our aim is to reduce the number of preterm births, stillbirths, and growth-restricted fetuses that are directly affected by asthma.”

Also a member of Vicki’s Pregnancy and Development Group is Dr Annette Osei- Kumah, who in 2012 was awarded the inaugural Florey Early Career Northern Health Research Fellow. The fellowship allowed Annette to conduct a two-year research project at the Lyell McEwin Hospital, helping pregnant women in the northern suburbs of Adelaide manage their asthma and reduce the health risks for their unborn child.