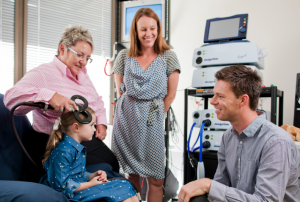 It has long been known that children born preterm are at increased risk of developmental problems, but to date, the tools to identify and treat affected individuals have been of limited effectiveness.

Dr Julia Pitcher and Associate Professor Michael Ridding of the Robinson Institute’s Neuromotor Plasticity and Development (NeuroPAD) Group are interested in how the brain responds to lifetime experiences by changing connections between brain cells, a phenomenon known as neuroplasticity. Their recent work shows that teenagers who had been born preterm showed relatively low brain plasticity in association with abnormally low levels of salivary cortisol. The data sheds light on the mechanism behind developmental problems with memory and learning due to preterm delivery, and may open up new avenues for diagnosis and treatment.

The human brain shows remarkable flexibility and resilience in the way it responds to the world. Neuroscientists use the term ‘plasticity’ to describe the lifelong ability of the brain to change its structure and function in response to experience and incoming stimuli from the environment. The high degree of plasticity in children’s brains is clearly evident in the enormous changes that take place in their development during infancy, early childhood and primary and secondary schooling.

In 2012 Julia and Michael published data promoting the first evidence that being born preterm – before 37 weeks of pregnancy – may reduce the brain’s ability to undergo plastic change. The studies, performed by Honours student Alysha Riley, involved comparing brain plasticity in three groups of subjects: adolescents born preterm, adolescents born at term and adults born at term. The work involved use of a non-invasive magnetic brain stimulation technique to measure neuroplasticity in the study subjects.

“Surprisingly, even very modest preterm birth was associated with a reduced brain response. On the other hand, term-born teenagers were highly ‘plastic’ compared with adults and the preterm teens.”

These days, infants born well before 37 weeks of gestation can be supported to survive thanks to medical interventions. However this new data suggests that aspects of brain development critical for normal childhood neuroplasticity take place during the fi nal weeks and days of pregnancy.

“The growth of the brain is rapid between 20 and 37 weeks gestation, and being born even mildly preterm appears to subtly but significantly alter brain microstructure, neural connectivity and neurochemistry,” said Julia.

This novel research is opening up exciting pathways to approaching an old problem. Researchers, doctors, parents and educators have known for some time that children born preterm often have diffi culties with learning, memory and motor development. However, because the problems are often subtle and occur in the absence of any detectable brain injury, interventions to help these children have not been very successful.

To further address this aspect of the problem and to investigate possible mechanisms that may be involved, Julia and Michael looked at levels of the hormone cortisol in their study subjects.

“Preterm teens had low levels of cortisol in their saliva, which was highly predictive of the reduced brain plasticity we observed,” said Julia.

Cortisol is often described as a stress hormone, but the Adelaide researchers have previously shown it also has a key role in regulating brain plasticity. Cortisol levels can be therapeutically manipulated and this could offer therapeutic potential for preterm children.

“Cortisol plays a critical role in learning, the consolidation of new knowledge into memory and the later retrieval of those memories. This might be important for the development of a possible therapy to overcome the neuroplasticity problem,” she said.

Published in the prestigious Journal of Neuroscience, Julia and Michael’s data attracted national and international attention. For the first time it showed clear physiological reasons why preterm children might have difficulties with learning and memory, and raised new possibilities for the development of targeted interventions for them.

The team is now conducting further research to more fully elucidate the role of cortisol in modulating brain development and plasticity, in particular whether cortisol affects specific types of learning and memory more than others.

From a prevention point of view, the research also adds to the already substantial body of evidence emphasising the need to support women to carry pregnancies to at least 37 weeks whenever possible.

“Even one extra week of pregnancy could make a huge difference to the future brain development of that child,” said Julia.