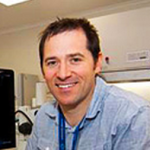 Cystic Fibrosis Airway Disease is an inherited life-long disorder for which there is no cure. Although there have been recent advances in treatments that have extended the lives of patients, these treatments have not removed the symptoms or the need for life-long medications and procedures. Dr Martin Donnelley, a Postdoctoral Researcher in the Cystic Fibrosis Research Group, is taking a different approach to improving the lives of people with cystic fibrosis. Martin is utilising his biomedical engineering and image processing background to develop a new approach for treatment evaluation. With the combination of varying expertise in his group, Martin believes they will speed up the process of developing a genetic therapy as a viable treatment or cure for cystic fibrosis through being able to quickly and rapidly test treatment options.

What is Cystic Fibrosis?

Cystic Fibrosis (CF) is an inherited recessive genetic disorder that affects approximately 1 in 3,000 people in Australia. It occurs when both parents pass on a faulty Cystic Fibrosis Trans-membrane Conductance Regulator (CFTR) gene, for which there are around 2,000 known mutations.

While CF disrupts most organs in the body, its life threatening effects are on the respiratory system (lungs). The CFTR gene codes for the CFTR protein, an ion channel present in epithelial cells, such as those that line the airway surface. In people with CF the ion channel defect results in dehydration of the airway surface liquid, and production of thick sticky mucus that clogs the air passages and traps bacteria. It is through repeated infections and blockages that irreversible lung damage occurs, which ultimately leads to premature death.

“Cystic Fibrosis is a debilitating disease for which there is no cure. Those with CF require frequent and high dosage medication and intensive physiotherapy throughout their life,” explained Martin.

“It has a massive impact on the quality of life for both the patient and their family, with the majority of patients spending the last years of their lives on oxygen with a lung function of around 10-15%.”

While the median age of death has increased to 37 years with advances in treatments, many patients die in their teens and twenties after a life of debilitation.

“It is ultimately lung disease that leads to the early death of those with CF. For this reason, our research is focused on improving lung function to significantly improve both the quality and length of life,” said Martin.

“We are working towards gene therapy – introducing a correctly functioning copy of the CFTR gene in the airways of those with CF, which we believe will correct or even prevent the lung disease ever occurring.”

The faulty CFTR gene was identified more than 20 years ago, and at the time it was believed that this discovery would lead to a cure within a few years. However, gene therapy has been much more challenging to progress than initially thought and it has been relatively unsuccessful.

“Up until very recently, none of the various attempts at achieving a clinically useful airway gene therapy for CF were successful. This followed a period where, in hindsight, there was a lack of understanding regarding the practical possibilities of what was an exciting but theoretical therapy.” said Martin.

“Very recently, the UK Gene Therapy Consortium released results showing a small improvement in lung function using non-viral vector gene therapy. This is great news for researchers around the world as it’s the first time a gene therapy approach has had a demonstrated benefit for CF patients.”

Unlike the UK group, Martin’s group are utilising a lentiviral vector that is estimated to be more than 1,000 times more efficient.

“This trial has demonstrated proof of principal; that we’re all on the right track, and we believe we will make a big impact in the coming years,” said Martin.

Accelerating the hunt for a cure

Associate Professor David Parsons leads the Cystic Fibrosis Research Group and has been working in this area of research for 20 years. In order to speed up the cure for CF he knew he needed to find a way to quickly test if a therapy was having a beneficial effect.

“With clinical assessments of CF treatments, a participant’s lung function is measured, a treatment is administered and there is a waiting period of months and perhaps years to see if there is any change to lung function,” explained David.

“In addition, it is difficult to detect if treatments are beneficial. If we could test and evaluate treatments in a much quicker and more efficient manner, we would change direction and look to alter treatments – speeding up the process significantly – potentially by years or decades.”

To solve this problem, David employed Martin who had a completely different research background with no experience in CF research. Rather, Martin has a degree in Biomedical Engineering and a PhD in image processing.

Together, David and Martin have developed new techniques for testing treatment effectiveness utilising the SPring-8 Synchrotron near Osaka, Japan. This large facility delivers the most powerful synchrotron X-ray radiation available. Consisting of narrow, powerful beams of electromagnetic radiation, synchrotron radiation is produced when electron beams, accelerated to nearly the speed of light, are forced to travel in a curved path by a magnetic field.

They are using the facility for x-rays that allow them to image microscopic cells that are unable to be imaged on other equipment. As the facility concentrates all x-rays into one area, they are able to measure a very high magnification to see microscopic changes.

“We are currently using a mouse model of CF to develop our gene therapies. As CF mice do not present with lung disease, we are measuring changes in their nasal cavity – where the disease presents itself,” explains Martin.

“CF is caused by an ion channel defect that reduces the airway surface liquid depth. The airway surface becomes dehydrated and the cilia on the airway surface do not beat correctly, making it difficult for the lungs to remove inhaled pathogens. We have developed imaging methods to measure changes in the ASL depth and mucociliary transit behavior using the synchrotron.”

Martin believes that once they have refined their skills, the synchrotron will be able to show in close to real time whether a treatment option is effective.

“I believe we will be able to image a live mouse, insert the new gene into the nasal cavity, wait 1 week and then re-image the mouse to see if the treatment has been effective,” said Martin.

“We currently perform studies in the lab in cell culture using a piece of the airway or tissue, but doing this in a live mouse in close to real time will be a major advantage – we will be able to tweak and rapidly test new therapies immediately.”

Currently Martin and David are utilising the Synchrotron to develop imaging techniques to show their approach is capable of measuring meaningful changes. The next step will be testing therapies.

“Once we can demonstrate this is the right approach we will start testing novel treatments and I believe this will lead to significant advancement towards a cure for CF,” said Martin.

“I’m excited about the whole process – utilising a complex physics and engineering solution for a biological problem. It’s a great example of how collaborations between very different fields can lead to a whole host of new ideas that would have not been considered otherwise.”