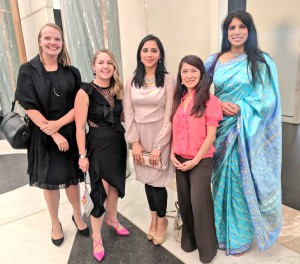 y, I attended Science Meets Parliament (SMP), hosted by Science and Technology Australia as one of the Superstars of STEM. I was one of over 200 scientists who converged on Canberra to bring science to the nation’s decision makers for two days. We were led by luminaries of Australian science who included Professor Alan Finkel (Australia’s Chief Scientist), Dr Larry Marshall (Chief Executive, CSIRO), chief scientists from several government departments, as well as Nobel Laureates and Australians of the Year, who brought the importance of science to Australia’s future.

SMP was a fantastic opportunity for me to meet and mix with hundreds of scientists across disciplines from different parts of the country. The first day included a training session that specifically developed networking skills for the delegates which helped me meet dozens of people I would not have otherwise met. Business cards were flying and we were immersed among our brethren who all shared a love of science and a desire to make a difference.

The key message for all scientists to take away from SMP is: scientists need to engage with politicians. Scientists bring an evidence-based rigour in their thinking which is valuable for policy-makers when addressing challenges in health, society, economy and the environment. The luminaries, mentioned above, all emphasised this point, as did several parliamentarians including Hon Michaelia Cash, Minister for Job and Innovation, Senator the Hon Zed Seselja, Assistant Minister for Science, Jobs and Innovation, and Senator the Hon Kim Carr, Shadow Minister for Innovation, Industry, Science and Research.

Scientists at all levels can bring this thinking to decision-makers and make a difference; it’s not just for chief scientists of departments to consider. Dr Cathy Foley, now Chief Scientist for CSIRO Manufacturing, related an anecdote that as a PhD student and member of the Council of Australian Postgraduate Associations, they objected to the low value of the Australian Postgraduate Award. This Council collected data and stated their case for an increase in the stipend; they were successful with the stipend increased 90% from $3,700 in 1982 to $7,000 in 1983.

Scientists can take action to affect policy in different areas and SMP made suggestions for what we can do. Scientists can be most effective when by acting as a collective, so join your professional society and act together to influence policy. You can also engage with your state and federal members of parliament and ask what their position is on areas of interest. Relationships with parliamentarians take time, so keep engaging with your members so they know your name. SMP was clear that action by scientists needs to be continuous for science to be embedded for policy-makers.

The overarching message from SMP 2018 is that scientists have a responsibility to inform and improve policy to make the world a better place.

For those with Twitter accounts, you can see all the excitement on the hashtag #SMP2018. 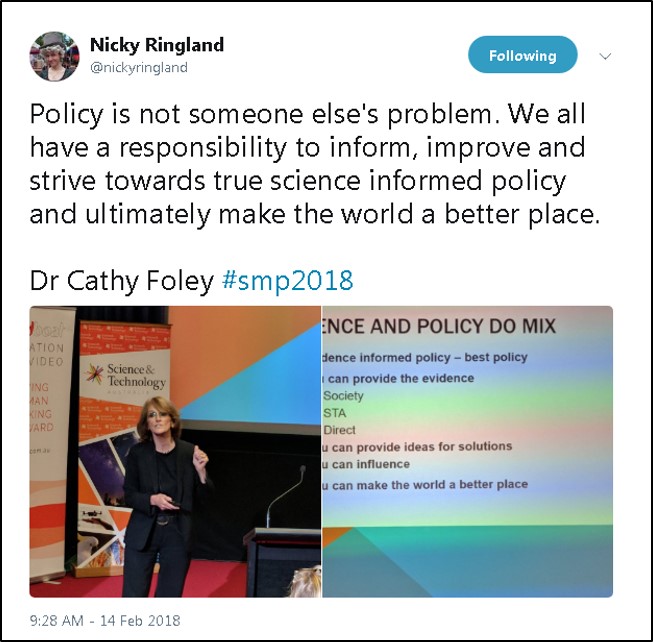 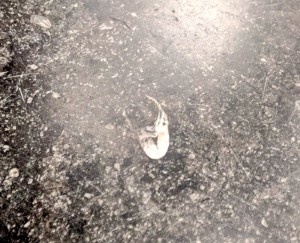 This entry was posted in Guest Researcher. Bookmark the permalink.