An international research team including the University of Adelaide has found further evidence that rare gene mutations can cause cerebral palsy, findings which could lead to earlier diagnosis and new treatments for this devastating movement disorder. 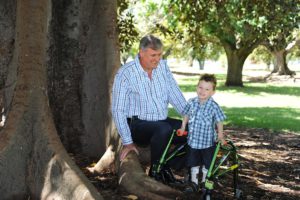 Emeritus Professor Alastair MacLennan with Mathew Reinersten, from Adelaide, who is an ambassador for the group’s cerebral palsy research

In the study published in the journal Nature Genetics  researchers employed gene sequencing to examine the DNA of 250 cerebral palsy families, and compared this to a control group of almost 1800 unaffected families. They then demonstrated the impact rare gene mutations can have on movement control using a fruit fly model.

The findings have important clinical implications. They will provide some answers to parents, as well as guide healthcare and family planning such as counselling for recurrence risk – often quoted as around 1 per cent but could be as high as 10 per cent when factoring in genetic risks.

“Cerebral palsy is a non-progressive developmental movement disorder impacting motor function, which affects approximately one in every 700 births in Australia and a similar number worldwide. Symptoms range from mild to severe and can include intellectual disability,” Emeritus Professor MacLennan said.

“Historically, cerebral palsy was considered largely the result of perinatal asphyxia – decreased oxygen to the baby’s brain at birth, however this has only been in found in 8-10 per cent of cases.

“Eliminating other known causes, including premature birth and trauma at birth, this leaves a large number of cases – as many as 40 per cent in some studies – with an unknown origin.”

“As we come to recognise the role of genetics in cerebral palsy, we open the door for new treatments, earlier diagnosis and intervention, which could lead to greatly improved quality of life.”Professor Jozef Gecz

Researchers at the University of Adelaide over many years have advocated that cerebral palsy is often caused by rare genetic variations (or mutations) which disrupt a child’s control of movement and posture.

“Where previous studies have indicated underlying genetic causes in cerebral palsy, this study is the largest to date and includes in-depth statistical modelling and new controls to overcome limitations of earlier research,” Emeritus Professor MacLennan said. 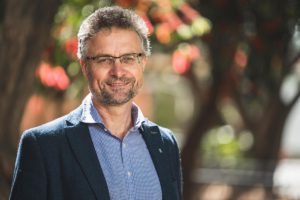 Co-author Professor Jozef Gecz, Channel 7 Children’s Research Foundation Chair for the Prevention of Childhood Disability and Head of Neurogenetics at the University of Adelaide, says as a conservative estimate, 14 per cent of cerebral palsy families in the study had an excess of damaging genetic mutations and inherited recessive gene variations.

“Genes don’t like to change; as soon as a gene is altered in any way you disturb its programing, and it can no longer perfectly perform what it’s designed to do,” said Professor Gecz, who is South Australia’s Scientist of the Year 2019.

“Our US collaborators were able to disturb the same genes in fruit fly as found in humans, and in three out of four instances it severely altered the movement of either fruit fly larvae or adults or both.

“The gene mutations were mostly spontaneous new variants occurring in the sperm or an egg of the parents, who are otherwise not affected.”

In some cases, identification of specific gene variations in individuals in the study led to new recommendations for patient health management, including treatments that would not have been initiated otherwise.

“As little as 30 years ago we were very limited in treatments for cerebral palsy, and the outlook for anyone diagnosed was grim,” said Professor Gecz.

“As we come to recognise the role of genetics in cerebral palsy, we open the door for new treatments, earlier diagnosis and intervention, which could lead to greatly improved quality of life.”

Other benefits of the study include a potential reduction in litigation, and evidence for further research to identify other damaging genetic variants in human DNA.

“The more we understand about the role of genetics in causing cerebral palsy, the closer we get to learning how to prevent it,” Professor Gecz said.

The Australian Collaborative Cerebral Palsy Research Group at the University of Adelaide’s Robinson Research Institute studies the causes of cerebral palsy, with particular focus on genetic pathways. The group has been a leader in its field for more than 20 years.