Research forthcoming at the Economic Journal has uncovered what is the first longitudinal and multi-country evidence for a midlife low in human happiness and well-being.  There really is a kind of midlife ‘crisis’ in feelings of satisfaction with one’s life.

The new study by University of Adelaide economist Dr Terence Cheng, and his collaborators Nick Powdthavee, and Andrew Oswald follows over 50,000 adults through their lives.  It finds that life-satisfaction of individuals gradually decreases from early adulthood, reaching a minimum at around the ages of 40 to 42, and after that point increases with age up to 70 years of age. This pattern traces out a U shape in well-being through the life cycle.

The idea of U-shaped well-being over much of the human lifespan is not a new one. Indeed this pattern has been documented for a large number of countries using cross-sectional data, i.e. data of different subjects at a point in time. However, up until now, researchers have not been able to replicate this pattern with genuinely longitudinal data – data on the same subjects observed over time.

In this new study, the researchers analyse four different data sets covering three countries – Australia, Britain, and Germany. Collectively these data sets track the lives of tens of thousands of individuals over time. The primary outcome of interest is happiness and well-being, which is measured using a conventional life satisfaction questionnaire asking individuals to indicate how satisfied they are with their lives.

Applying the test to the data, rather than examining how the levels of life satisfaction vary across different people as it is usually done, the authors investigate the within-person changes in life satisfaction, and document how these changes evolve over time.

This emphasis on following the changes in life satisfaction in the same people is important as it implies that any results consistent with a U shape in well-being cannot be due to a fluke or to differences in from one individual to another. They must stem instead from changes through time in the quality of the lives of these individuals. 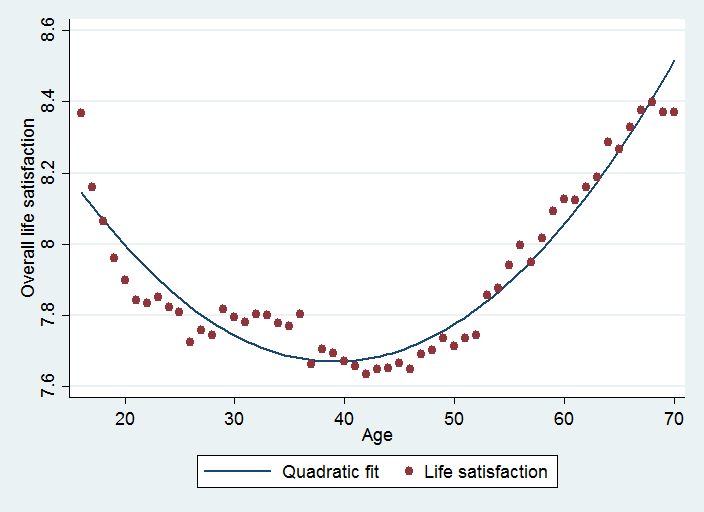 The figure shows a U shape in life satisfaction with age in the Household, Income, and Labour Dynamics in Australia survey data.