The decline of manufacturing in South Australia

Figure 1 show the manufacturing sector’s share of South Australian gross state product and corresponding Australian gross domestic product from 1989/90 to 2015/16. Over much of this period the manufacturing sector’s share of the South Australian economy remained a few percentage points above the national average. However, this excess share has fallen sharply over the past decade, from 3.1 per cent in 2006/07 to just 0.6 per cent in 2015/16. This narrowing has been particularly acute since the Global Financial Crisis.

Thus the South Australian economy now much more closely resembles the national economy in terms of its propensity for manufacturing. In this sense it cannot be considered a “manufacturing state”. Nonetheless, the state has strengths in certain areas of manufacturing, such as food and beverage processing, defence, water-related products, automation, and medical equipment. 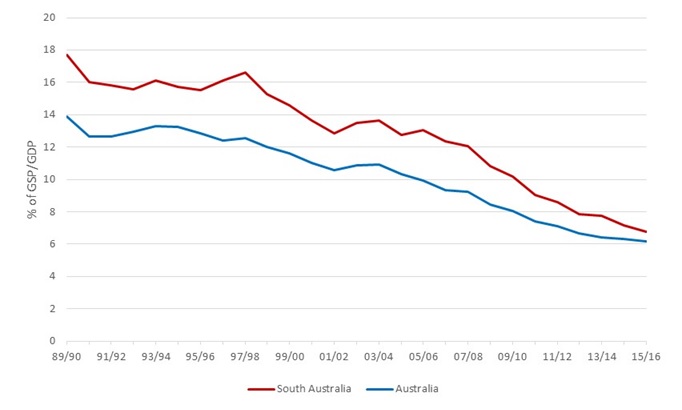 It is beyond the scope of this post to examine in detail the causes of the relatively large decline in manufacturing in South Australia. To put it briefly it would reflect various factors including, but not limited to, the historical importance of motor vehicle manufacturing in the state which has effectively collapsed; adverse competitive effects associated with the previously elevated exchange rate and pressure on input prices during the mining boom; impact of globalisation, which has placed greater emphasis on natural endowments as a means of differentiating production and comparative trade advantage; shifting consumer tastes; lower labour productivity; and various industry specific factors. 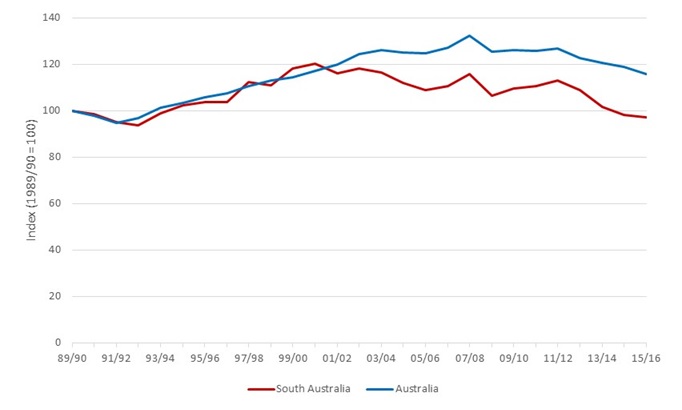 The recent experience for manufacturing suggests that government policy in respect of economic development should take a more industry-agnostic approach in future, focusing on activities that are likely to benefit a broader range and type of businesses. Relevant examples would include providing high quality infrastructure; facilitating reliable and efficient utility services; investing in high level technical skills; providing quality education and training services; minimising regulatory burdens; providing a competitive tax environment; and ensuring efficient delivery of public services. Such an approach should not preclude industry or region specific policy interventions from being adopted to help people and businesses cope during periods of significant adjustment (e.g. support for motor vehicle industry workers to help them transition to alternative employment).

This entry was posted in Anthony Kosturjak and tagged manufacturing. Bookmark the permalink.