Are recent variations in cereal and meat exports seasonal?

In our recent July 2017 Economic Briefing Report we noted that there had been a decline in the value of South Australia’s overseas exports of food and live animals, driven by reductions in exports of cereals and cereal preparations and meat and meat preparations (despite these falls exports remained at a strong level). A reader has raised the question of whether the recent variations in cereal and meat exports were driven by seasonal factors.

They are probably “seasonal” in the sense of arising from ‘favourable’ or ‘unfavourable’ farm growing conditions impacting production yields.

A linkage between farm production and exports is apparent for wheat, which has accounted for around 90 percent of South Australia’s exports of ‘cereal and cereal preparations’ exports over the past five years. The figure below shows the estimated value of South Australia’s wheat production and exports of ‘cereal and cereal preparations’. We compiled production values by taking tonnages from ABARES and putting them in value terms using prevailing export prices and took the value of wheat exports from the ABS. From visual inspection there is a clear correlation between the two series, reporting a correlation coefficient of r=0.8 over 2001/02 to 2014/15. Our conjecture is that the causation is from production to exports although we have not investigated this empirically. 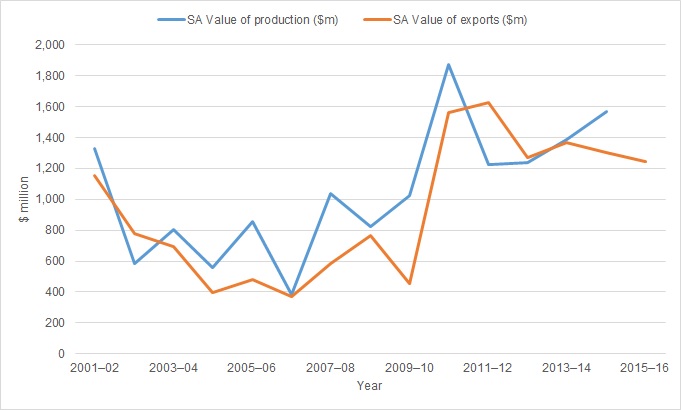 Unfortunately there is no readily available data for meat production for comparative purposes.

This entry was posted in International trade and tagged agriculture. Bookmark the permalink.