What drove the significant rise in merchandise exports to China in 2013/14?

The value of South Australia’s merchandise exports to China reached a peak of $3.4 billion in 2013/14, when they rose by 52 per cent compared to the previous financial year. Exports to China have since eased with the value of exports in the year to May 2017 being $2.3 billion (i.e. down 30 per cent from their peak in 2013/14).

The large rise in the value of exports to China in 2013/14 was driven primarily by ‘iron ore and concentrates’ although there were also increases in ‘copper’ and ‘confidential items’—see figure below. 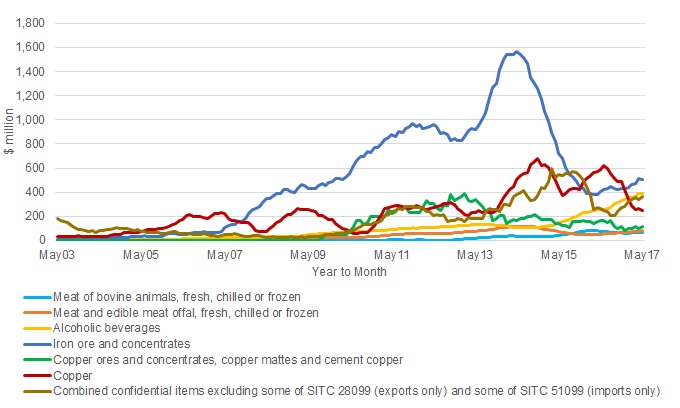 During the same period, copper and confidential items exports to China were valued at $0.5 million and $0.4 million, up 116 per cent and 115 per cent respectively.

The “confidential items” is a rather volatile category in the analysis of trade data, as items can switch back and forward between their true category and the confidential category over time. This has been an issue at times with barley exports, for example.

This entry was posted in International trade and tagged China, exports. Bookmark the permalink.