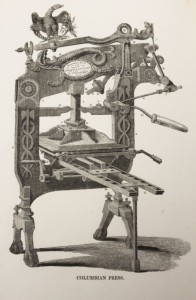 William Savage was born in Howden, Yorkshire in 1770. He was educated at the local church school and in 1790 commenced business with his brother as a printer and bookseller. He moved to London in 1797 and shortly thereafter was appointed to the Royal Institution of Great Britain, where he performed a number of roles, including superintendent of the printing office.

In the early 1800s Savage established his own printing business in London and just four years later was commissioned to print Edward Forster’s British Gallery of Engravings, which established his reputation as a printer. Savage went on to devise a printing ink free of oil in 1832 and publicised its invention in Preparations in Printing Ink in Various Colours. It would earn him a Society for the Encouragement of Arts medal, along with a monetary reward. 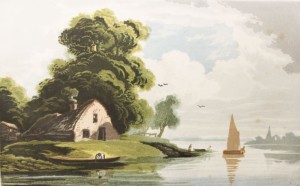 In Practical Hints on Decorative Printing, Savage discusses the origin of printing and considers the many improvements which have taken place in the art of printing. Topics covered include fine presswork and the materials required to achieve it, including the sharpness of the types; the condition of the press and the smoothness of its platen surface; the properties of the ink and the quality of the paper.

The Library’s copy of Practical Hints on Decorative Printing was acquired to mark the retirement of Mr Ira Raymond, the University’s third Librarian, on the 6th July 1982. It was then presented to the Barr Smith Library on the occasion of the naming of the Ira Raymond Exhibition Room three days later. It also includes a bookplate of its former owner, the renowned 19th century book cover designer and 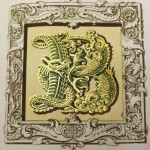 Citation: Practical hints on decorative printing: with illustrations engraved on wood, and printed in colours at the type press / William Savage; 1822