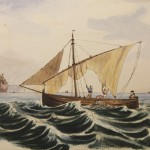 Hermann Koeler, one of the first Germans to visit South Australia and to document the conditions prevailing in the colony between 1837 and 1838, is believed to have been born on 3rd August 1813 in Celle, Germany. Of his family, education and employment relatively little is known, except that he was the first of ten children from his father’s second marriage and that he was a medical doctor, engaged as a ship’s surgeon, aboard the ‘Solway’ which departed Hamburg, via England, in June 1837 bound for Kingscote on Kangaroo Island. 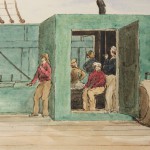 It is presumed that Koeler then crossed over to Glenelg aboard the cutter ‘William’ on 21st October 1837. At the time of Koeler’s arrival, Adelaide was home to approximately two thousand settlers, most of whom lived in tents, timber huts and shanties thatched with reeds, located around the parklands and the banks of the River Torrens. It is thought that Koeler occupied a reed hut himself at Glenelg for the six months following his arrival but what, exactly, he did during his stay remains somewhat of a mystery. What we do know, is that his contribution to our understanding of the relations between Aboriginal people and white settlers in the first years of the colony is significant. Unlike Protector William Wyatt, who painted a picture of relative racial harmony, Koeler, who did not represent an official body, reported incidents of friction and threats between the two groups which had not been reported elsewhere. He commented on the antipathy of the lower-class colonists towards the Aborigines and indicated that the colonists kept loaded rifles in their rooms, taking them on short journeys as well. Koeler also described how the spread of white settler’s animals had had a most detrimental effect on the local wildlife, significantly depleting their huntable stock levels and how the white sailors had spread disease throughout the Aboriginal community. 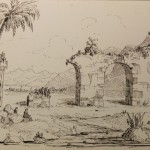 Through his publications Koeler also provided important information about the living conditions of the two thousand white settlers in Adelaide during the early years. Conditions were harsh; basic needs such as milk and meat were both expensive and rare and reliable drinking water was difficult to source. He also offered extensive and astonishingly perceptive details about the physical conditions of the colony, including its sparse vegetation, its seasons and its geology.

One of the most substantial contributions Koeler made, however, to our understanding of life in Adelaide at the time was through his notes on the Kaurna 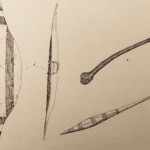 language, which predated Teichelmann’s and Schürmann’s 1840 account. Koeler was by no means a linguist and what he recorded was not the Kaurna language, spoken in the Kaurna community, but a deliberately simplified contact jargon which was used to communicate with Europeans. In fact, his wordlist of 140 Kaurna terms, most of which described body parts or body functions and movements, failed to distinguish between Kaurna and Pidgin English words, the latter of which had spread from New South Wales to South Australia. Despite this, perhaps even because of it, Koeler’s linguistic notes remain significant. His wordlist is one of the earliest ever compiled on the Kaurna language, it is a totally independent source and it provides a number of early examples of South Australian Pidgin English which would later develop into “cattle station English” in the state’s north. 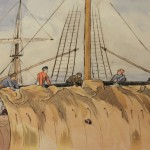 Hermann Koeler’s three sketch books were acquired by Rare Books & Special Collections in September 2014 with the assistance of the University’s General Linguistics Professor, Peter Mühlhäusler. They include representations of Aboriginal weapons and artefacts, drawings of boats (potentially those used by Koeler to travel to and from South Australia) and possibly even a representation of an Aboriginal man wearing a possum skin.

The Sketch books are available for viewing in Rare Books and Special Collections at MSS 0185 (Strong Room Manuscripts Collection).