“They’re building a Library for him…” 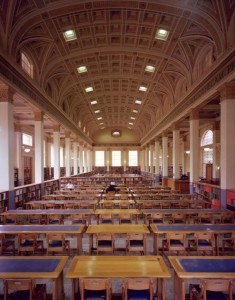 (from Tenterfield Saddler, words and music by Peter Allen)

The early Barr Smith Library, featuring one of the best monumental reading rooms in Australia, was opened in 1932. It was funded by donations from Tom Elder Barr Smith and named in honour of his father Robert Barr Smith who donated some £11,000 for books to establish the first University of Adelaide Library.

And yet the only memorial to perpetuate his name is the Barr Smith Library.

Like so many other major benefactors, the Barr Smith name is prominent but little is publically known of the man – of his character, his interests, his likes and dislikes, and his legacy. There has been no major biography dedicated to Robert Barr Smith or the Barr Smith and Elder families. We will attempt to give a fuller picture of the person behind the name. 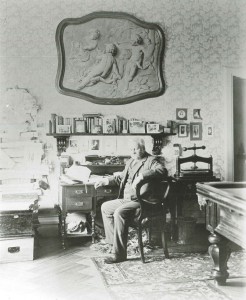 Scottish born Robert was frugal by habit but generous by nature; he disliked pomposity and royalty but was firm friends with Lord and Lady Tennyson; he was not aligned with any faith and did not attend church yet he financed the completion of St Peter’s Anglican Cathedral and supported St Mary Mackillop’s Josephite nunnery and home for unwed mothers; he was intensely private and did not seek laudatory praises but hosted lavish Hunt Club lunches and society balls.

He was devoted to his wife and family and was kind and generous to strangers needing advice or financial help. He was an astute businessman who, with his partner Thomas Elder, built the Elders, Smith & Co mercantile empire, but who could not be persuaded to take up any political office. He believed in education for all, hard work and free enterprise and was close friends with the feminist reformer Catherine Helen Spence. He had an insatiable appetite for knowledge, recorded facts and trivia in great detail, and had a liking for fun and frivolity. In short, he was a complex personality.

You can find out more about Robert Barr Smith from our Stories webpages.

We need to recognise and value our benefactors, not as faceless entities, but as living beings who, because of their beliefs and personalities, contributed so much to our institutions and our country’s bounty. Otherwise, like Allen’s wise grandfather saddler, they will simply be names on a building.