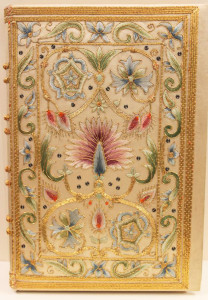 The plot of Sire Degrevaunt alternates between episodes of love and battle, in which the protagonist, King Arthur’s nephew and favoured knight, Sir Degrevant, not only fights to protect and reclaim his territory from his neighbour, an earl wrongfully hunting on his land, but also for the affections of the earl’s daughter, Melidor.

Sire Degrevaunt is a medieval romance composed circa 1440.  It survives in two manuscript versions; MS 91 at the Lincoln Cathedral Library (a collection of texts assembled by Robert Thornton) and Ff.i.6 at Cambridge University Library (an anthology compiled by the Findern family of Derbyshire and their friends).  The Lincoln manuscript comprises nine romances including Sir Degrevant (about 200 lines of which is missing) plus other, predominantly, religious texts whilst the Findern manuscript contains a selection of courtly poetry, including the text of Sir Degrevant, written by two different scribes.

The Library’s copy of Sire Degrevaunt was edited by F.S. Ellis after the edition printed by J.O. Halliwell from the Cambridge manuscript.  It is one of only 350 copies printed in red and black in Chaucer type on paper and includes a wood-engraved frontispiece designed by Edward Burne-Jones.  Most notably, it was printed and sold by William Morris at the Kelmscott Press, where it was finished on the 14th March 1896 and issued on the 12th November 1897. 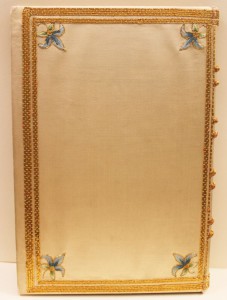 William Morris, poet, novelist, translator, social activist and textile designer, established The Kelmscott Press in 1891 at Hammersmith, in the county of Middlesex.  Here, he reprinted 52 works (over 66 volumes) with print runs ranging from 200 to 1500.  His choices included Jacobus de Voragine’s The Golden Legend, Geoffrey Chaucer’s The Canterbury Tales, Ramon Llull’s The Order of Chivalry and The Poems of William Shakespeare, amongst others, and clearly reflected his interest in medieval texts and poetry.  He was also artistically influenced by the illustrated manuscripts and printed tomes of Early Modern Europe and sought supplies of the highest quality hand-made paper and vellum upon which to showcase his work.

The beauty of Rare Books & Special Collections’ copy of Sire Degrevaunt, is not limited to its hand-made, woodcut-bordered paper, however.  It’s also been custom-bound in cream satin, richly embroidered with gold wire, black beads and coloured silk threads.  Its hand-sewn borders and its flowers and foliage, encapsulating a large peacock-style centre ornament, are the work of Miss Gladys Lloyd for the book’s late owner, Clarence B. Hanson, after whom the Birmingham Museum of Art Library is named.  Of Gladys Lloyd herself surprisingly little has been recorded, although it’s likely she was well known to Morris, who was at the centre of the Art Needlework moment in the 19th century and a key player in founding the Royal School of Needlework in 1872.  Given the detail and quality of her work it is possible that she studied here; she may have also been connected with Morris’ daughter, May, a fine embroiderer in her own right and director of the embroidery department of her father’s business, Morris & Co.

The Library’s copy of Sire Degrevaunt was purchased from Sophie Schneideman Rare Books and Prints (London) in December 2011 with funds bequeathed by Agnes Jackson and from the Victor Allen Edgeloe Bequest.  It is available for viewing in Rare Books & Special Collections at SR 821.29 D32.K 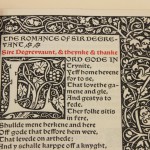 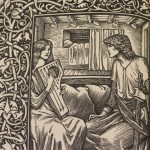 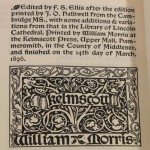