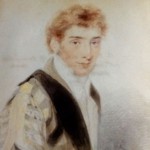 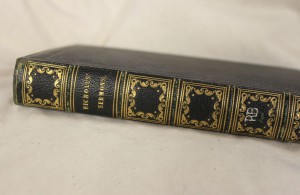 Published in 1845, Practical Sermons was written by the Rev. Benjamin Elliott Nicholls, M.A. of Queen’s College, Cambridge, and Curate of St. John’s in Walthamstow.  Of his personal life, relatively little is known, other than his date of birth, 1796, and his marriage, in 1825, to Miss Amelia Poynder at St. Mark’s Church in Kennington.  The couple had three children, the first, also named Amelia, was born in 1826.  Nicholls died just 20 years later.  Of his professional life, however, we know substantially more.  Nicholls was a noted author, writing numerous Sermons and books during the 19th century, including Sunday Exercises on the Morning and Evening Services of the Church… (1832), The Book of Proverbs, Explained and Illustrated (1842) and The Mine Explored; or Help to the Reading of the Bible (1853).  His 1845 publication, Practical Sermons, contains 19 different sermons, including “The detection and punishment of sin”, “Salvation by grace”, “Divine direction” and “Rest for the weary”.

Special Collections’ copy of Practical Sermons is particularly rare.  On the fore-edge of its pages, appears a hidden painting of Government House, Adelaide.  It includes several people in the surrounding gardens and another historical building in the background, most likely the St Peter’s Cathedral.  The painting is invisible when the book is closed and only appears when the pages are fanned. 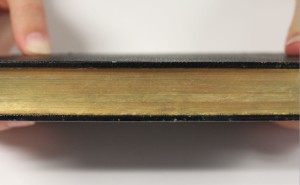 Fore-edge painting is a centuries-old tradition.  The “fore-edge” refers to the edge at which a book is opened.  In early book history, this edge was titled in ink for identification purposes.  Books were then stacked horizontally on shelves with this edge facing outwards.  The edge had a function; it was never intended to be beautiful – until the 16th century, when Cesare Vecellio, cousin of the famous Renaissance painter Titian, decided to paint, mostly portraits, on this edge.

By the 17th century bookbinder Samuel Mearne had taken the art of fore-edge painting a step further, essentially ‘hiding’ the image from view.  The hidden fore-edge painting was created by first fanning out the book’s pages and then locking them into place with the aid of a finishing press or vice.  Using watercolours, the painting was then delicately applied and left to dry.  Once the book was closed, evidence of the painting would still be visible.  So, the page edges were then gilded or occasionally marbled.  This outer layer of gold or marbling would hide the painting entirely, such that it was visible only when the book’s pages were furled back. 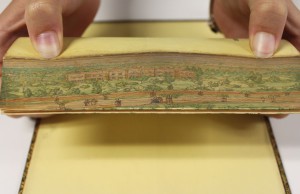 In the 18th and 19th centuries fore-edge painting enjoyed great popularity.  Artists were employed to paint a variety of scenes, ranging from the architectural to those of historic battles and outdoor sports.  Eroticism, too, featured regularly, along with landscapes, and portraits of the famous.  The hidden fore-edge soon expanded to include paintings around all three edges of the book.  The double fore-edge also emerged, in which a scene was first painted on pages fanned in one direction and then a different scene painted on the same pages fanned in the opposite direction.  When viewing the paintings, neither would interfere with the other.

Identifying the painters of fore-edge scenes is notoriously difficult.  They rarely ever signed or dated their work, although binders such as London’s Taylor & Hessey were known to stamp their name on the page edges.  Most paintings, however, were recognised by their subject or style and, based on these, could occasionally be attributed to a particular artist.  The Government House scene on Special Collections’ copy of Practical Sermons has not been signed by its painter. 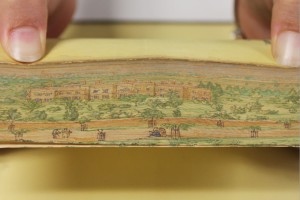 For more examples of fore-edge paintings, visit the Boston Public Library website, where the “On the Edge” gallery allows viewers to zoom in and out of more than 200 hundred fabulous landscapes, seascapes, portraits and 19th century sporting scenes.  If you would like to learn more about the painting process itself, the Friends of the State Library of South Australia recently published a short video, “Fantastically Fast Fore-edge Paintings by Stephen Bowers” where the artist’s skill is on display in time-lapse mode.

Practical Sermons was purchased in October 1968 and is available for viewing in Rare Books & Special Collections at SR 252 N616.

Acknowledgement
Rare Books & Special Collections would like to acknowledge and thank Helen Boyce, great great granddaughter of Rev. Benjamin Elliott Nicholls, and her family, for their valuable contribution to this post.  We are particularly grateful for their assistance in describing Nicholls’ personal life and his prodigious work ethic.