“They shall not grow old as we that are left grow old;
Age shall not weary them, nor the years condemn.
At the going down of the sun, and in the morning,
We will remember them.” 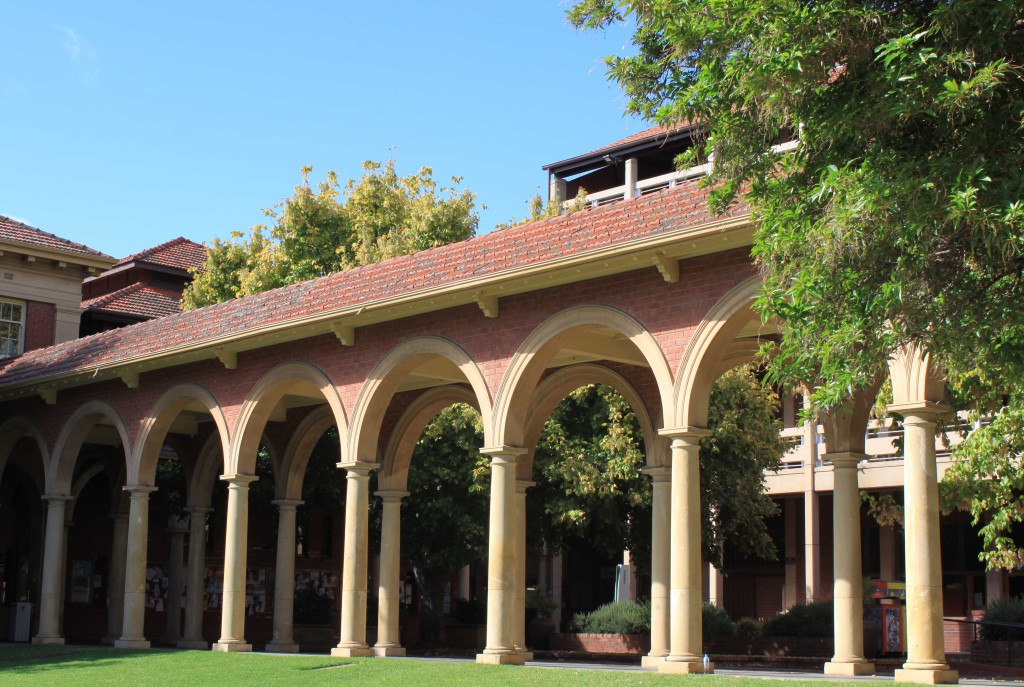 The Ode of Remembrance is inscribed on a plaque at the eastern end of the Adelaide University Union Cloisters. The cloisters were built to serve as a memorial to the 470 members of The University of Adelaide who served Overseas in World War I, 64 of whom lost their lives during the War. A War Memorial had been considered for some time, however was regularly deferred due to the lack of space available to the University. In 1925 the Royal Agricultural and Horticultural Society had vacated the Exhibition grounds,and the land was made available to the University. Shortly after this time, another 5 1/2 acres were granted to the University by the Cabinet, with the aid of the Leader of the Opposition, the Honorable. L. L. Hill. This gave the University approximately nine acres on which to build. 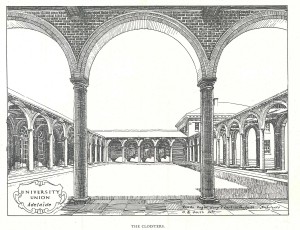 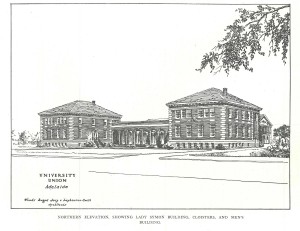 The cloisters were part of an appeal towards the building of a union building for men (to accompany the planned Lady Symon Building for women students), a common dining hall, and the Memorial Cloisters. It was hoped that the cloisters would allow the University to keep “green the memory of its sons who served their country in its greatest hour of need.” The complex was designed by a former University of Adelaide graduate, Mr. L. Laybourne Smith. The whole design was to be red brick, and the style Georgian, to match the intended design of future buildings of the University. 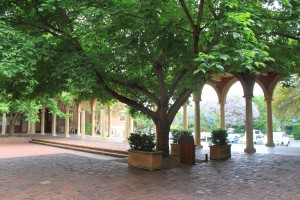 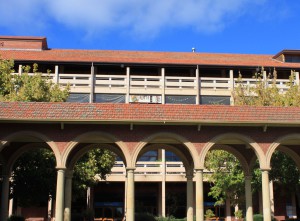 The University Council, Professors and Students were extremely enthusiastic about the appeal, encouraged by Professor Henderson, who over the course of the War had gathered nearly £12,000 towards the appeal, leaving £20,000 remaining to be collected. Professor Henderson wished that the remaining £20,000 should be given, not by a few, but by a great many. It seemed to him it would be “a fine thing if it were regarded as a thank-offering from the boys of the University to their past benefactors, to the celebration of their jubilee, and to those who gave their lives in their behalf during the Great War.”  It was stated that no one had given more readily than the professors, and students volunteered to donate 1 pound per student for 3 years.

The cloisters were completed in 1929 approximately the same time as the Southern and Western arcades, which included the Lady Symon Building, Refectory and Cafeteria, with the George Murray Building completed nearly ten years later in 1938. On the 25th of April 2015 an additional plaque was added to the Cloisters, to commemorate the 100 year anniversary of the Gallipoli Landing. 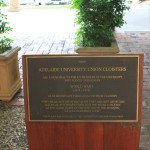 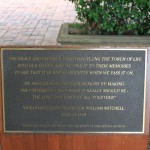 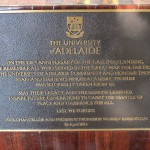 This entry was posted in Uncategorized and tagged Adelaide, History, Memorials, University of Adelaide, World War I. Bookmark the permalink.