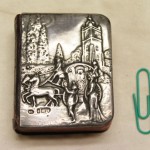 A student of the South Kensington School of Cookery, Matilda Lees Dods is believed to be the school’s second graduate to teach cookery, offering her “introductory course of lectures” in London in 1876.  For almost two years she toured through the manufacturing towns of Scotland and north England, where her talks attracted audiences of up to a thousand people.  She also travelled through the United States, lecturing in both New York and Philadelphia, and between 1880 and 1918 produced a total of eight cookery books.  These included The Art of Cooking (1880), A Handbook of Cookery (1881), Handbook of Practical Cookery (1886), Cottage Cookery (ca. 1898), Hints for the Sick Room (1898), My Mother’s Cook Book (1902), The Ideal Home (ca. 1914) and Meatless and Less-meat Cookery (ca. 1918).

The Library’s copy of Handbook of Practical Cookery (1906) is the new and enlarged edition and includes 836 pages on the philosophy of cookery, plus countless recipes for soups, purées, sauces, breakfast dishes, salads, fish, roast meats, pies, pastries, puddings, cakes and jellies.  It also offers instructions for the carvi 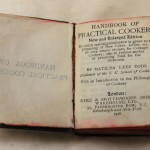 ng of various meats, plus more than forty illustrations of its recipes.

Bound by printing firm, Eyre & Spottiswoode Ltd, the book is in miniature form, measuring just 5.3 cm high by 4.4 cm wide; slightly larger than a standard paperclip.  Its maroon leather cover features a sterling silver plaque ornamented, in relief, with a church in the background and people, horses and a carriage in the foreground.  To the lower left of the cover appears the Birmingham sterling silver hallmark and the London makers mark, W.C (William Comyns).  A registered number is just visible below this.

Cover embellishments such as this one were not uncommon to Eyre & Spottiswoode.  The London-based firm had its origins in the 18th century printer William Strahan, who, in 1766, purchased a right in the office of the Queen’s Printer, which produced official documents for the Crown.  Strahan’s son later shared the business with nephews, Andrew and Robert Spottiswoode, forming Eyre & Spottiswoode in 1812.  Although they focused initially on printing, it wasn’t long before the company’s attention turned to 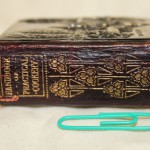 publishing.  Their silver covers began to appear on religious works such as The Book of Common Prayer, which depicts the heads of five angels, in relief, surrounded by clouds.  The portrait cover on the miniature edition of Poetical Works of Alfred Tennyson (ca. 1909) is also their work, along with the alternative cover for Lees Dods’ Handbook of Practical Cookery, upon which a cauldron and fire are displayed.

Handbook of Practical Cookery was purchased in 2005 for the Library’s miniatures collection and can be viewed in Rare Books & Special Collections at RB/M 641.50942 D647h

Citation
Handbook of Practical Cookery: New and Enlarged Edition: In which special prominence is given to the preparing of new cakes, jellies, etc; to very simple recipes for cottage cookery: also to various modes of preparing food for the sickroom. Matilda Lees Dods. London: Eyre & Spottiswoode, 1906 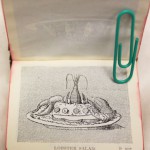 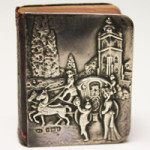 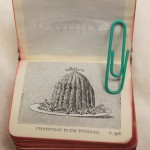 Examples of Other Eyre & Spottiswoode Covers 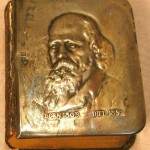 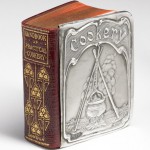 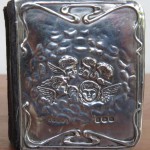