Engravings of the Arteries… by Charles Bell (1824) 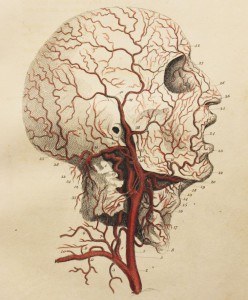 Engravings of the arteries… is an 1824 publication, both written and illustrated by Charles Bell.  It consists of 14 hand-coloured plates depicting the various human arteries, likely intended to be read in conjunction with his textual work, The anatomy of the human body (Vol. II – heart and arteries).  Bell’s magnificently detailed etchings are designed to facilitate student learning, providing accurate guides for those attending his anatomy, physiology, pathology and surgery lectures.

Charles Bell was a Scottish anatomist, neurologist, surgeon, writer, lecturer and draughtsman, born in 1774 to clergyman William Bell and his wife Margaret Morice.  An artistically gifted child, Bell was initially schooled by his mother who, recognising his talent at an early age, had him taught by the painter David Allan.  He also attended the Royal High School of Edinburgh and the University of Edinburgh, where he obtained his medical degree in 1798.  He spent much of this time apprenticed to his brother John, also a surgeon, and contributed both text and illustrations to John’s various editions of The anatomy of the human body (1802-1826). 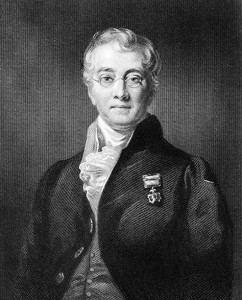 Although admitted to the Edinburgh Royal College of Surgeons, Bell left for London in 1804 where he opened his own private surgery and school of anatomy.  Both the practice and the school flourished, with Bell overseeing an increasing number of students dissecting anatomical specimens, most of which had been acquired illegally from grave robbers (as was common practice at the time).  He continued to publish books on the anatomy of the brain, on nerves and on arteries and in 1814 his efforts were rewarded with an offer of appointment to the surgical staff of Middlesex Hospital.  However, when news of the Battle of Waterloo reached London the following year, he travelled to Brussels where, as a military surgeon, he operated on hundreds of wounded soldiers, all the while recording (by way of sketch or watercolour painting), the variety of injuries he saw.

Bell was fascinated with the nervous system, privately publishing in 1811, what is considered by some to be the founding stone of clinical neurology, Idea of a new anatomy of the brain. In it, he describes his experiment with an animal, the results of which lead him to believe in a division of the brain; the cerebrum, for impressions and motions, connected with anterior roots, and the cerebellum and posterior roots, for governing the operation of the inner organs.  In fact, in 1822 François Magendie revealed the true difference between anterior and posterior roots, distinguishing between sensory and motor nerves.  Acrimonious debate soon followed over who was actually the first to make the discovery, with Bell later issuing subsequent incorrectly dated revisions of his essay with textual alterations. 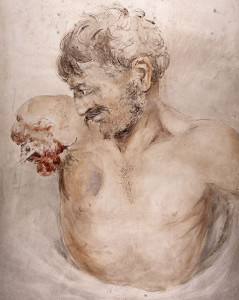 Bell’s work on emotion expression, however, played an important role in the development of Charles Darwin’s thoughts on the origins of human emotion life; the latter detailing these opinions in The expression of the emotions in man and animals (1872).  Bell was also the first to describe, in 1821, a form of facial paralysis resulting from the dysfunction of the cranial nerve, in which the ability to control facial muscles on the affected side was lost – now known as Bell’s Palsy.  He was also instrumental in the creation of the Middlesex Hospital Medical School, became the first Professor of Anatomy and Surgery at the College of Surgeons in London, accepted the position of Professor of Surgery at the University of Edinburgh upon his return home in 1836, and was eventually knighted by King William IV in 1831.

The Library’s copy of Engravings of the arteries… is magnificently illustrated by Bell.  His early training under painter David Allan and his experience both operating on and sketching the wounded in the Battle of Waterloo is clearly evident in his detailed etchings.  His hand-coloured plates of the heart, the aortic system, the arteries of the head, including the brain, plus the arteries of the arms, hands and legs, are indicative of his concern for accuracy.  Drawn to assist students not only with the study of anatomy but also with the process of dissection, Bell’s illustrations reflect a belief that true understanding can only be achieved when both drawing and description are combined.  In the book’s preface, Bell himself declares “drawings are a kind of notes, too, more easily consulted; and bring to mind, in a more lively manner, all that was associated in our first studies.”

Engravings of the arteries… can be viewed in Rare Books & Special Collections at RB 611.13 B43. 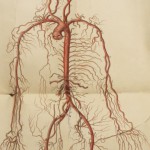 The aortic system, drawn by C. Cheyne and engraved by J. Stewart 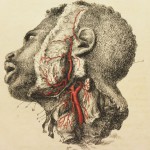 Arteries of the head, etched by Charles Bell 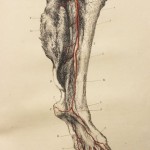 Arteries of the hip and ham, etched by Charles Bell 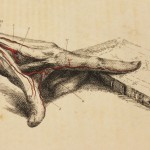 Arteries of the hand, drawn by C. Cheyne and etched by Charles Bell 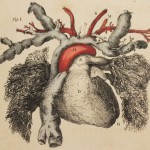 “A view of the heart, nearly in the situation in which it is seen when the breast is opened.” Etched by Charles Bell 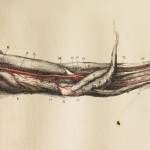 Arteries of the arm, etched by Charles Bell

Examples of Charles Bell’s Artworks from the Battle of Waterloo 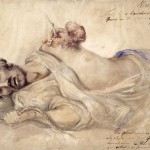 Soldier with missing arm, lying on his side, grasping a rope, by Charles Bell. Source: Wellcome Library; London, CC BY 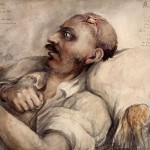 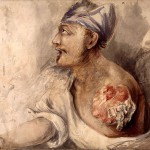 Citation
Engravings of the arteries; illustrating the second volume of the Anatomy of the human body [by John Bell] and serving as an introduction to the surgery of the arteries. Charles Bell. London: printed for London, Longman, Hurst, Rees, Orme, Brown, and Green, 4th ed., 1824

“Treating the wounded at Waterloo – Sir Charles Bell and his art from the battlefields”. Ad Pollé, Europeana blog, 18 June 2015.

The anatomy of the human body: containing the anatomy of the heart and arteries. Vol. II. John Bell.  London: printed by A. Strahan, Printers-Street for T. N. Longman and O. Rees, Paternoster-Row and T. Cadell Jun. and W. Davies, Strand., 2nd ed., 1802

Idea of a new anatomy of the brain; submitted for the observations of his friends; by Charles Bell, F.R.S.E. To which are added selections from letters written by the author of the essay to his brother, Professor George Joseph Bell, between the years 1807 and 1821.