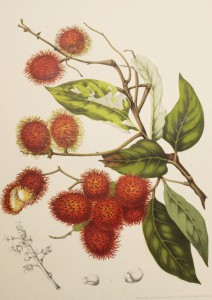 Fleurs, Fruits et Feuillages de l’île de Java or “Flowers, Fruits and Foliage Selected from the Island of Java” is a magnificent folio of 40 chromolithographed plates by P. Depannemaeker after Berthe Hoola van Nooten.  Accompanied by Berthe’s descriptive text, in both French and English, the plates reflect a mixture of indigenous, naturalised and introduced Javanese fruits, flowers and shrubs.  Resplendent in rich hues of red, green, yellow, orange and mauve, the illustrations lend themselves perfectly to the then relatively new technique of chromolithography.

Dutch botanical artist Berthe Hoola van Nooten was born in 1817, the daughter of Vicar Johannes Wilhelmus van Dolder and his wife Philippina Maria Batenburgh.  Little else is known of her early life, other than her marriage, at the age of 20, and her subsequent move to New Orleans with husband Judge Dirk Hoola van Nooten, where the couple established a female seminary connected to the Protestant Episcopal Church.  Shortly after the move, tragedy struck the family when Berthe’s husband died from yellow fever in 1847, leaving her a widow with five children to support. 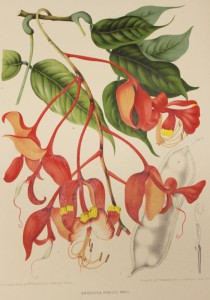 Sources suggest she soon fell into financial trouble related to her Young Ladies Institute, for which she had purchased a large estate.  Indeed, repeated court orders to answer to creditors were presumably a contributory factor in her move to the Island of Java with her brother.  Here she reportedly applied for a government subsidy to establish a Protestant female seminary.  However, it appears this was denied as, in a desperate attempt to provide for her family, she immediately turned her attention to producing the breathtakingly beautiful study of Javanese plants, Fleurs, Fruits et Feuillages…

In the book’s preface, Berthe more than hints at the dire circumstances she found herself in on the Island, stating:
“You may not, like myself, have tasted the bitterness of exile… you may not, like myself, have experienced, even in the spring-time of life, the sorrowful separation from home and country – the absence of the friendly greeting, on a foreign shore… Death may not have snatched away from you, the arm which was your sole support… bereavement may not have entered your dwelling, like mine, as with one sudden stroke to tear away the veil of sweet illusions, which, as yet, had hidden from your eyes the stern realities of life – to place you, with a lacerated heart, a shrinking spirit and a feeble and suffering body, before an unpitying necessity, which presents no other alternative than labour.” 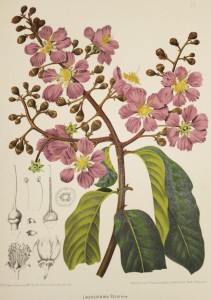 Despite these hardships, it’s clear Berthe gained a great deal of satisfaction from producing Fleurs, Fruits et Feuillages, concluding in its preface:
“I have found, in the very accomplishment of this task, real and solid enjoyment.  I have felt that it is impossible even to draw near to the domain of natural science, without experiencing soft and balmy influences, sanctifying in the elevating tendency and soothing in their effable suavity.  It is the experience of this which a causes me to hope that my work may perchance serve the double purpose, of procuring me the means to accomplish my object, and of inducing others to follow me, in a path, that has such peculiar charms to our sex, and which holds out to us real consolations, in leading us to studies, so calculated, to draw our minds to the source of all true comfort.”

The expressive nature in which Berthe describes her life, and the plants in her book, is perfectly matched by the talents of artist and chromolithographer Pieter de Pannemaeker.  A prolific watercolour artist and printmaker active in Belgium in the 1800s, de Pannemaeker tended to specialise in landscapes and botanicals.  He contributed an estimated 3,000 illustrations to a range of books and periodicals when Belgium was the centre for botanical publishing.  His works appeared in some of Europe’s finest horticultural journals such as Flore des Serres et des Jardins de l’Europe (Flowers of the Greenhouses and Gardens of Europe) and Lindenia: Iconographie des Orchidées (Lindenia: Iconography of Orchids).  Occasionally his artwork appears in auction houses, with Christie’s New York selling L’Illustration Horticole: Revue Mensuelle Des Serres et Des Jardins for $5,250 in 2008. 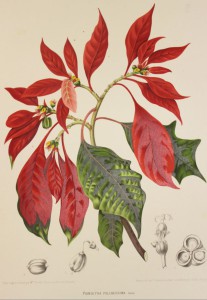 Fleurs, Fruits et Feuillages contains 40 of de Pannemaeker’s chromolithographs, each vividly depicting a range of tropical and citrus fruits, native shrubs and trees, blossoms and flowers and ornamental plants such as the spectacular Poinsettia.

Recognising a need for conservation treatment, Fleurs, Fruits et Feuillages was adopted by Special Collections Librarian, Cheryl Hoskin, under the Friends of the Library’s Adopt-a-book program in April 2016.  Having undergone extensive repairs to its cover, including the spine and board corners, the book can now be opened and read easily.  This full condition report, including “before” and “after” photographs, demonstrates just how conservation treatment can enhance the longevity and use of a significant historical resource.

To learn more about the Adopt-a-book program and its fantastic results, visit the Rare Books & Special Collections website. 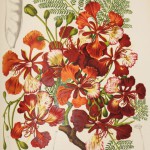 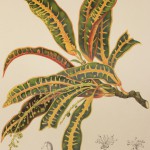 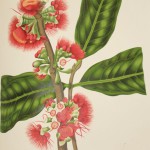 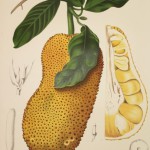 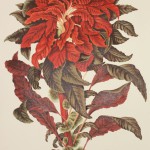 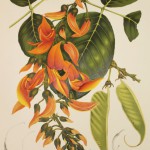