The Rime of the Ancient Mariner by Samuel Taylor Coleridge (1876) 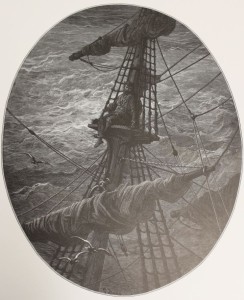 The son of Devon headmaster and clergyman John Coleridge and his second wife Anne Bowden, Samuel Taylor Coleridge was born in 1772, the youngest of their ten children. Coleridge initially studied at his father’s school, where he was described as an avid reader, before attending the London grammar school, Christ’s Hospital, upon his father’s death in 1781.  Here, he excelled at Hebrew, Latin and Greek, as well as English composition, and made life-long friends with writer and essayist Charles Lamb.

In 1791 Coleridge entered Jesus College, University of Cambridge.  Although focused on a future in the Church of England, as per his father’s wishes, poetry was never far from Coleridge’s mind and he composed a mass of it over the next four years.  During this time, he also made friends with fellow student Robert Southey.  In fact the pair married the Fricker sisters, Edith and Sarah.  Coleridge’s marriage, however, was to be an unhappy one and he would spend much of his time away from his wife. 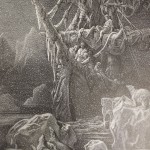 In 1795 Coleridge befriended English poet William Wordsworth, who would begin to influence his work considerably.  His writing took on a more natural style and by 1798 the two men had produced a volume of poetry, Lyrical Ballads, now considered the first great work of the Romantic school of poetry.[1]  It included Coleridge’s famous poem, The Rime of the Ancient Mariner.  That year the pair visited Germany, where Coleridge attended lectures on physiology and biblical criticism, and became aware of developments in scholarship that were little known in England.

Over the next decade Coleridge continued to write poems, including Christabel, Fears in Solitude, Frost at Midnight and Dejection: An Ode.  He lectured in London and Bristol on literature and philosophy, wrote about religion and political theory, spent two years on Malta as secretary to the Governor, all the while constantly plagued by ill health, financial woes and a very unhappy domestic life. 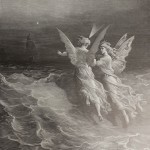 On his return from the Island, Coleridge separated from his wife.  However, an ongoing opium addiction retained its powerful hold over him.  So much so, that in 1816 he took residence in the Highgate homes with physician James Gillman, who attempted to control the poet’s dependence.  Coleridge would remain in Highgate until his death in 1834.  During this time he produced some fine poetry and prose, including Sibylline Leaves (1817) and Aids to Reflection in the Formation of a Manly Character (1825).  His contribution to poetry, both as a poet and a critic, was profound.  Major poets of the time were deeply influenced by his work, and Highgate, for many of them, became a place of literary pilgrimage.

The Rime of the Ancient Marnier is illustrated by French artist, sculptor and printmaker Paul Gustave Louis Christopie Doré.  Born in 1832 in Strasbourg, France, Gustave Doré was a gifted child, publishing his first illustrated stories at just fifteen years of age.  As a young man he worked in Paris as a caricaturist for a French paper and was commissioned to illustrate works of major poets, including John Milton, Dante and Lord Byron.  Word of his talent spread quickly throughout Europe and in 1853 he was asked to illustrate the 1865 English Bible.  This was followed by other famous works such as Milton’s Paradise Lost (1866) and Edgar Allen Poe’s The Raven (1883). 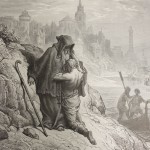 In 1869 Doré was approached by Blanchard Jerrold who suggested they collaborate on a work that would provide a comprehensive portrait of London.  Doré signed a five year contract which would see him spend three months of every year in London, and for which he was paid the then massive sum of £10,000.  London: A pilgrimage was published in 1872.  It contained 180 of Doré’s engravings and although it was criticised by some as focusing on the most poverty-stricken aspects of London, it was a commercial success and brought with it additional commissions from other publishers.

Doré also ventured into to painting and sculpture but it was in his engravings where he shined as an artist.  He was prolific in his work, producing more than 8,000 wood engravings, 1,000 lithographs, 400 oil paintings and 30 sculptures.[2]

Doré never married and continued to live with his mother illustrating books until his death in Paris in 1883.  He was made a Chevalier de la Legion d’honneur in 1861. 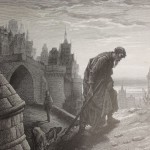 The Rime of the Ancient Mariner describes the experiences of a sailor whose ship is forced by a storm into Antarctic waters.  Along the way, the mariner encounters an albatross who guides the ship and its crew out of the ice and into calmer waters.  To the crew’s initial dismay, the mariner kills the albatross, a mistake for which they will dearly pay.  Their ship is pursued by angry spirits into unchartered waters where they are confronted with a ghostly hulk.  On board, a skeleton and a deathly-pale woman are playing dice for the souls of the mariner’s crew.  One by one they die, leaving the sailor alive to see, for seven days and seven nights, the curse in the corpses’ eyes.  Spared death, he begins to appreciate the sea creatures, admiring their beauty and blessing them.  The bodies of the crew begin to rise again and guide the ship to the mariner’s homeland but, riddled with guilt, the sailor is forced to wander the earth, telling his story over and over, teaching a lesson to all he meets – a penance for shooting the albatross…

The Rime of the Ancient Mariner is available for viewing in Rare Books & Special Collections at RB/E 821.72 C69r.D 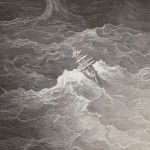 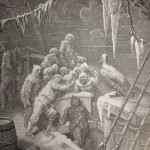 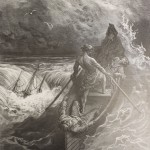 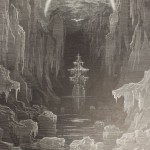