The Raven at her Writing-Desk: Letters 1849-1889 of Amelia Louisa Vaux Gretton 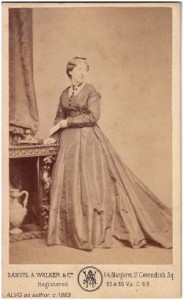 “The approach to Port Adelaide is very curious; you wind through a creek not wider than a river, bordered by sands which are covered with shrubs which seem growing actually out of the water; a number of pelicans stand along the shore, and beautiful parrots are seen flying about. About two hours rowing brought us to the Port; there are a good many ships, and an air of great and increasing prosperity; carts and teams of bullocks, porters, bales of goods etc in every direction; still it will take some time to make it like Liverpool, to which Mr. Melhuish compared it; you sink ankle deep in sand at every step which is rather uncomfortable.” (p. 9)

Such was Amelia Gretton’s first impression of South Australia in 1850 when she disembarked from ‘The Constance’, full of hope and optimism for a happy and prosperous future, remarking: “The sky is most heavenly, more beautiful even than an Italian sky, but there is something buoyant in the air; one does not feel languid.” (p. 12)

Amelia had suffered a long and emotional engagement to the ‘wild boy’ George Mussell Gretton, but her beloved father had finally given his consent and the young and adventurous couple had travelled to the colony to join her cousins, the architect Edmund Wright and his brothers, in search of fortune. 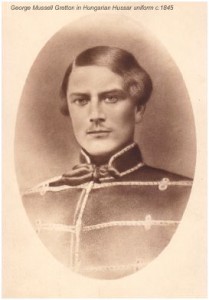 Amelia’s hopes for the future were dashed when her adored husband died of typhus a few days after their arrival, and perhaps darkened her observations of the colony:

“Jaundice is very prevalent here, a sign the climate cannot be healthy. All the people looked dried up, the children all tall, lanky, and sallow. The men only live for business; money, money is their idol. As my dearest husband truly said after only one day in Adelaide, “it is the worship of the Golden Calf with 20 per cent written between its horns.” (p. 28)

Amelia remained in the colony until the birth of her son, George Le Mesurier Gretton, six months later, after which she returned to Europe and her family in Italy.

Amelia was already a published author of two romance novels before her marriage, and proved a witty and eloquent observer of life and tribulations in the colony. On her return to Europe, she supported herself and her son by publishing articles on Italian life and society in magazines such as Chambers Journal, and continued to entertain her family with tales of her life in Britain and Italy.

In 1868 Amelia and her son returned to Australia, settling in the Colony of Melbourne with the aim of furthering George’s prospects. On arrival they stayed for a time with Fred and Fanny Wright in Toorak, Amelia’s letters portraying both delights and woes of society and praise for the attributes of Sir Redmond Barry and the delights of the Melbourne Public Library.

“The most striking sight in Melbourne is the Public Library. It is a building which even in London would be thought remarkable. A very long and lofty hall, with a great number of side rooms on either hand, all fitted up with reading tables, writing materials and well filled bookshelves. The number of people reading was large, but nothing to what it is at night, when the long lines of tables are occupied by working men, poring intently over their books in perfect quiet and order. A room is set apart for women, and it is chiefly availed of by young women engaged in work all day who come here to study of an evening. The admission is gratis from 9 a.m. till 10 p.m., the only condition being that every person before taking down a book should wash their hands. In the same building is an Art Gallery, with copies of statues and busts, and a few original pictures by English living Artists. It was amusing to see the grave enjoyment of several Chinese lads who were looking about them with very intelligent faces. Then another day George and I went to the University where they have a very handsome Museum built on the plan of the South Kensington and really wonderful for a country still in its infancy.” (p. 187) 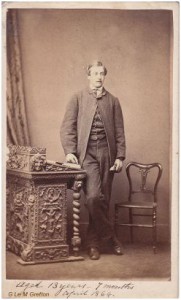 In 1871 George was appointed Judge’s advocate to Sir Redmond Barry and acted at the trial of Ned Kelly, before returning briefly to London so George could be called to the Bar. In 1877 they moved from Melbourne to Adelaide to further George’s career, Amelia once again expressing her disdain with Colonial society:

“I have purposely abstained in my family letters from grumbling or describing the low, narrow, vulgar qualities of the Adelaideans, because I wished to make the best of things, and also from the fear that anything I said in the general letter disparaging to the colony383 might find its way back here, and do George a great deal of injury. They are an odious set of people, so ignorant, so prejudiced, so self-satisfied, so busy and eager in their little round of pleasures and engagements. The girls in society pass their time in the most frivolous pursuits; they go every week to a lawntennis club – on a set day, which nothing must interfere; another day is devoted to archery – two other days to the Rink; they mostly go without their mothers.” (p. 279)

In 1882, Amelia and George, now with a wife and four children, return to England for good. George served as a captain in the Warwickshire Regiment, wrote articles (several of which were published in the South Australian Register) and spent much of his time doing welfare work for the Children’s Country Holiday Committee and working to improve the living conditions of the poor.

As described in the introduction, Amelia’s story is more than 40 years of family saga:

“This is a story of love, terrible loss, family and faith. It is also a historical document. It spans the second half of the 19th century. It spans the oceans, by sail and by steam. In Australia she casts a withering eye on early colonial society. In Italy she chronicles the life of an anglo-italian banking family against the background of the Risorgimento. And cholera. In Britain she engages with provincial society, the American civil war, the future career of Kaiser Bill, imperial expansion, education for the gentry and for the poor, sponsored emigration … church schisms, literary lions – and lionesses, socialist agitation, Irish terrorism, London fogs.”

Splendidly enhanced by introductory material, footnotes, family trees (including those of the Wright and Le Mesuier families), timeline, photographs and a detailed index, this publication is a valuable primary source on the Colonial history of South Australia and Victoria and 19th century Europe. We greatly appreciate the opportunity to host this unique document. 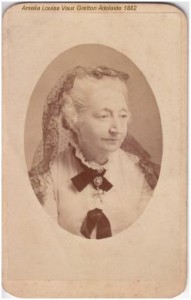 The Raven at her Writing-Desk: letters 1849-1889 of Amelia Louisa Vaux Gretton (née Le Mesurier, a.k.a. the Raven) / selected and with an Introduction by her sister Adelaide Granet; this version edited with an introduction by Emily Gretton.

This entry was posted in Stories. Bookmark the permalink.