Mapping an Exhibition: Have Book, Will Travel 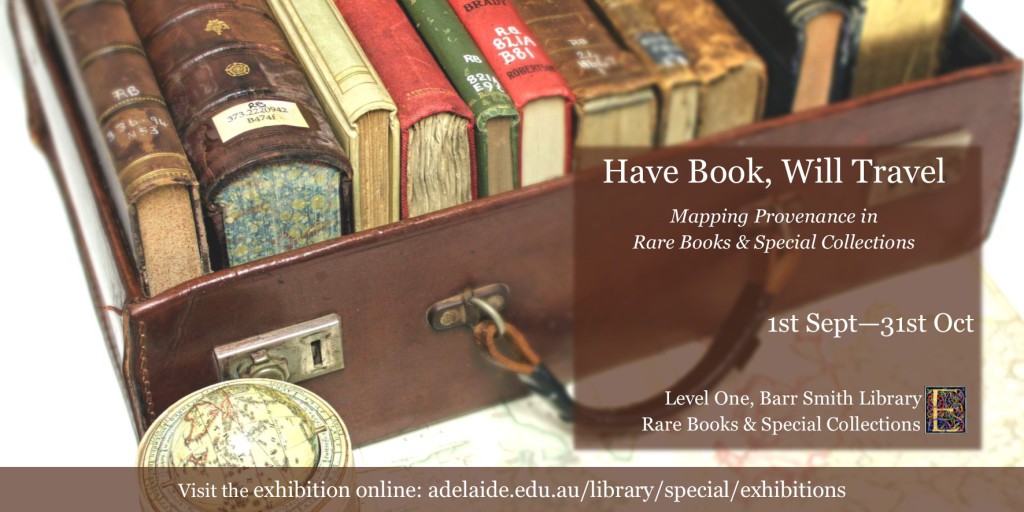 From America, England, Europe and even Antarctica, many of the books held in Special Collections have travelled far and wide to get here. This exhibition showcases just how far some of these books have come, based on the inscriptions and bookplates found inside their covers. 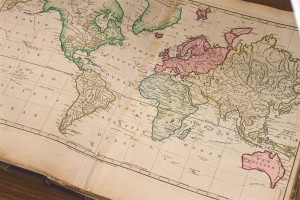 The initial idea for mapping the provenance of items in Special Collections came after reading a blog post about mapping pre-1600 European Manuscripts in the United States and Canada. Using data from the Schoenberg Database of Manuscripts, Mitch Fraas from the University of Pennsylvania Library was able to map the journeys of manuscripts from their arrival on the East and West Coasts to their current location and all the places they stopped along the way. You can read more about Mitch Fraas’ project online at the Mapping Books Blog: goo.gl/bfTAEJ This blog post started me thinking about our books in Rare Books and Special Collections, many of which contain inscriptions, signatures or bookplates of former owners, all of which fall under the description of “Provenance.” This provenance information is often accompanied with locations, so I decided to use this information to map where these books had travelled from.

Mapping is the act of tracing the origins or movement history of people, objects, occurrences etc. by marking known past locations on a map. By mapping provenance we gain an insight into the history of our books – where they have travelled from and how long ago, allowing us to peek into the lives of owners and collectors.

What is provenance and why do we record it? 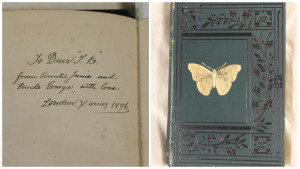 Provenance is a record of ownership, custody or location of an historical object. In the case of books, this can mean signatures or notes written in books, as well as bookplates and stamps. The study of provenance in books allows us to learn more about how people throughout history have interacted with books, as well as the influence that books have had on social, intellectual and written history. It can also allow us an insight into the lives and interests of people throughout history, from merely seeing the items they collected to reading their detailed annotations and notes.

The nature of provenance in books appears to change over time, covering a wide array of formats and styles such as; 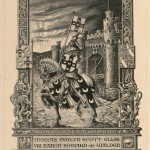 Many early forms of provenance often reflect the scarcity of paper for general use, shown in the use of blank spaces in books used for handwriting practice or notes. Bookplates and book labels increased in both popularity and complexity amongst those well off enough to afford large personal libraries, and later became an item more for vanity rather than indicators of ownership.

With time came changing attitudes towards marking or ‘defacing’ books. Now it’s often considered ‘taboo’ to write in or on books and books printed today often won’t last as long as books printed 300 years ago. Mostly provenance now takes the forms of noting or highlighting in books used for research.

Today provenance in books is highly valued by researchers, historians and librarians alike as it allows us to: 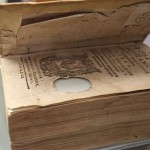 While provenance is considered important by many today, it has not always been this way. Many items are often written in, but not dated by the owners, contain only first names, or had bookplates or signatures removed, damaged or scribbled over by more recent owners. For many years, bookplate or autograph collectors have defaced books to collect samples for their collections, cutting bookplates out and adding them to separate albums. Even libraries (including our own!) have added to the elimination of provenance, covering examples of ownership or location with Library stickers, stamps or through rebinding. Booksellers can also be guilty of removing provenance in order to sell a “perfect” copy of a book.

How did they get here? 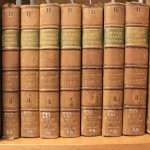 The Barr Smith Library has been built up gradually over time and reflects the changing collection interests of the University of Adelaide as it has expanded its teachings. A significant portion of the books in our collection were donated, either by prominent book collectors or former members of The University of Adelaide. Others were purchased second-hand in the early days of the Library when the budget was small. Books were also picked up cheap by Professors on trips to England for research or personal visits.

In many cases it can be obvious where some of our books have come from. Some were purchased in bookshops after perhaps being brought over to South Australia by their early owners and later sold or given away. Some were donations which have been signed by the author, and presented as a gift to a friend or colleague who later donated it to the Library. However, for many books in the collection, we have very little knowledge about their exact history. Purchase or donation information often gets lost over time, and a lot of the books themselves have next to no provenance or other indicators of their origins. 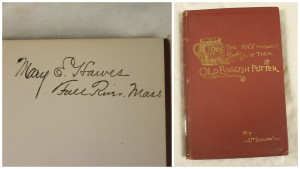 Even with provenance, there are often large gaps in a book’s history – how did a book that was signed and dated from England in the 18th century turn up in Adelaide in the 21st?

For every book we can trace, there are many more whose origins and travels remain a mystery.

How does this exhibition work?

For the purposes of narrowing down the field, this exhibition is centred on traceable provenance. Traceable means the book must include at least one of the following:

This exhibition features both physical and virtual elements.

The virtual exhibition consists of an interactive Google map featuring all of the books with traceable provenance that we have discovered since this project started at the beginning of the year. The map includes details of each book and their provenance, as well as picture. 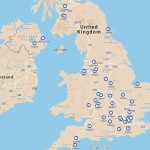 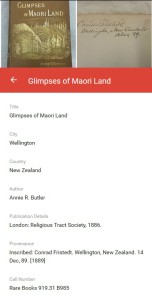 By visiting the map you can see a world map featuring nearly 100 books. By selecting a marker on the map, you will be able to learn more about that book, including its provenance listed, and view any associated pictures of the item. You can also search for specific books, people or notes by using the search tool in the side bar. Make sure you expand the list of books to view them all by title – some books have travelled between multiple locations over time and appear in each new location.

You can also check out our Provenance Archive to see many of the signatures and bookplates discovered in our collections.

This exhibition is on display until the 31st of October, and can be accessed during all library opening hours. You can find the exhibition on Level One of the Barr Smith Library, The University of Adelaide.

This entry was posted in Exhibitions and tagged Exhibition, Mapping, Provenance. Bookmark the permalink.