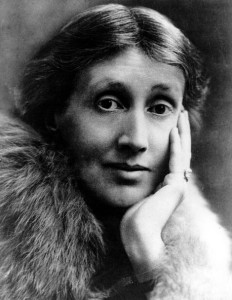 Kew Gardens, originally written in 1917 and published by Virginia Woolf and her husband in 1919, is a short prose piece in which the lives of men and women, passing by a botanic garden bed in London, are explored. Comprising just 14 pages, the Library’s copy is the second edition, with accompanying woodcuts by artist, Vanessa Bell.

Born Adeline Virginia Stephen in 1882, Virginia Woolf, as she was professionally known, was one of eight children. Her parents, noted historian and author, Sir Leslie Stephen, and painter’s model and nurse, Julia Prinsep Duckworth Stephen, had both been married and widowed previously. They were also socially and artistically well connected. Sir Leslie’s first wife had been Harriet Marian Thackeray, daughter of the famous English novelist William Makepeace Thackeray, while Julia, whose aunt was the renowned British photographer, Julia Margaret Cameron, had modelled for several Pre-Raphaelite painters. When they married in 1912, the couple had a further four children of which Virginia was the third. 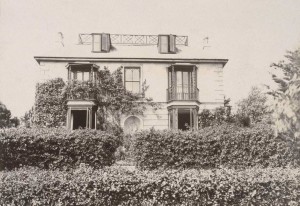 The family lived at Hyde Park Gate in Kensington and spent the summer months at their home, Talland House, in St. Ives, Cornwall. It overlooked beautiful Porthminster Bay and the rugged Godrevy Island, with its majestic lighthouse. Woolf loved the scenery here and her childhood memories inspired much of her later writing, most notably, To the Lighthouse. As a girl, she read copiously and easy access to her father’s personal library of classics fuelled her vivid imagination. She was also the genius behind the family’s anecdotal newspaper, Hyde Park Gate News, in which she often poked fun at her siblings. Despite this obvious early talent, however, Woolf and her sisters were home-schooled, whilst her brothers were formally educated and sent to Cambridge – a decision of her father’s which she would bitterly lament.

In 1895, when Woolf was just 13, her mother died suddenly. Just two years later, her half-sister Stella died. These events sparked the first of numerous mental collapses that Woolf would have over her lifetime. A second breakdown followed the death of her father in 1904, for which she was briefly institutionalised. By 1906 she had also lost her beloved brother, Thoby. This had such a profound effect on Woolf, that she later re-imagined him as ‘Jacob’ in her novel Jacob’s Room, and again in 1931 as ‘Percival’ in The Waves.[1] Throughout her life Woolf consulted at least a dozen doctors about her mental illness and spent parts of 1910, 1912 and 1913 at Burley House, known then as a private nursing home for women with nervous disorders.

In between periods of illness, however, Woolf was able to take courses in Latin, German, Ancient Greek and history, and she continued to write. In 1915 her first book, The Voyage Out, was published, followed by Night and Day in 1919. Some of her most well-known books followed shortly after, including Mrs Dalloway (1925), To the Lighthouse (1927), Orlando (1928) and her much talked about book-length essay, A Room of One’s Own (1929). A number of her early works were published by her half-brother at his imprint, Gerald Duckworth & Company Ltd. However, later titles were produced at Woolf’s own, independent publishing house, Hogarth Press. 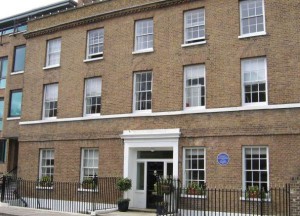 Hogarth Press was established in 1917 by Virginia and her husband, Leonard Woolf. The pair had married two years earlier and were living at Hogarth House in Richmond, after which they named the business. Rejected from St. Bride’s school of printing because they were not trade union apprentices, the couple purchased their own handpress and set about teaching themselves the meticulous art of printing in their dining room. Bookbinding was not entirely new to Virginia. She had bound her own books since the age of nineteen, and she and Leonard were excited that these skills, combined with the press, would allow them to print their own work, free from editorial censorship. In fact, Woolf herself stated she was now “the only woman in England free to write what I like.”[2] One of the main reasons for establishing the Hogarth Press was to assist authors in publishing small books that would otherwise stand little chance of being accepted by larger, commercial companies. The Press flourished, publishing titles by the likes of T. S. Elliot, Katherine Mansfield and E. M. Forster, but it had other benefits for Woolf too. It provided her with a form of aesthetic therapy, the physical nature of letterpress printing liberating her mind and forcing her to rethink the composition of her work, including word choice, punctuation use and sentence construction.[3] The Hogarth Press essentially marked the beginning of a new direction in her writing. 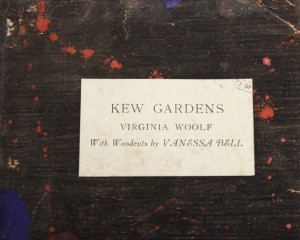 The first edition of Kew Gardens was printed at the Hogarth Press in 1918. It was published the following year and received tremendous praise from The Times Literary Supplement. The Woolf’s had only printed 170 copies and now found themselves overwhelmed with orders for more. Unable to meet the demand, they asked printer Richard Madely to produce a second edition of 500 copies – these too were sold out by the end of 1920. The Library’s copy of Kew Gardens is one of these limited second editions, with woodcuts by Woolf’s sister, Vanessa Bell, whom Woolf esteemed greatly for her expressive artwork. In fact, the pair worked together regularly, Vanessa designing a number of covers for Hogarth volumes, including most of Woolf’s own novels and essays. Kew Gardens‘ woodcuts are reminiscent of the foliage and insects Woolf describes in the story and its cover, equally bold, is hand-painted in black, with splashes of brown, red and blue, undoubtedly also a reference to the snail and the flower-beds within the book.

The plot of Kew Gardens centres around four groups of characters. Although they appear in pairs or as families and couples, they seem to be lost in their own individual worlds, often preoccupied with memories of past relationships. Even a snail is on its own mission in the garden to get past a dead leaf. Essentially Woolf’s story emphasises the many ways in which people interact with one another and yet remain alienated from each other. One man reflects on a relationship that might have been, another gentleman talks of a beautiful European woman with whom he once travelled, two elderly ladies keenly observe that old man – just little things, but combined they form a complex scene. In Kew Gardens, Woolf wanted us to see the beauty and complexity in the smallest of moments, where even the most mundane and unexceptional aspects of daily life, once drawn together, can create something truly special.

In June 2016 this book was restored under the Adopt-a-book program. To learn more about its original condition and to see some fascinating “before” and “after” photographs, take a look at its condition report.