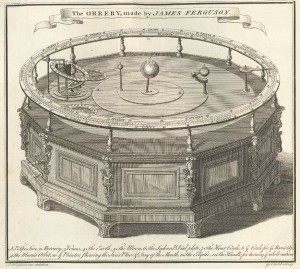 “Of all the sciences cultivated by mankind, Astronomy is acknowledged to be, and undoubtedly is, the most sublime, the most interesting, and the most useful.  For, by knowledge derived from this science, not only the bulk of the Earth is discovered, the situation and extent of the countries and kingdoms upon it ascertained, trade and commerce carried on to the remotest parts of the world, and the various products of several countries distributed for the health, comfort and convenience of its inhabitants; but our very faculties are enlarged with the grandeur of the ideas it conveys…”.  This enthusiastic introduction by James Ferguson to the wonderful science of astronomy appears in his 1757 publication, Astronomy explained up Sir Isaac Newton’s principles…

James Ferguson was born near the village of Milltown of Rothiemay in Scotland’s north-east in 1710.  He was the second son of tenant farmer John Ferguson and his wife Elspeth Lobban.  Ferguson’s parents were poor but his father could read and write, and whilst he taught his eldest son to read, Ferguson listened in, essentially teaching himself the skill.  At the age of seven, Ferguson was sent to a Keith grammar school for just three months.  This was to be his only formal education.  He was an inquisitive boy, though, and when he was sent to a neighbouring farm to keep sheep, he amused himself by making models of mills and spinning wheels – the result of both a keen interest in mechanics and an early memory of his father jacking up the roof of the family’s cottage.  He was also fascinated with the stars and developed a device of his own to chart them. 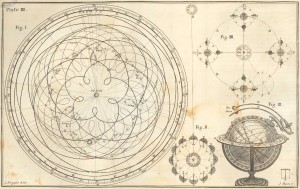 A growing need to earn a better living took Ferguson away from the farm and to various occupations, including servant to both a miller and a doctor.  He was also employed by James Dunbar of Durn, where he cleaned clocks and maintained machinery.  It was here that Ferguson began to draw patterns for needlework and also decorated the gateposts of Durn House as a pair of terrestrial and celestial globes.[1]  His success at this art gave rise to thoughts of becoming a painter, and in 1734 Sir Dunbar’s sister, Lady Dipple, took Ferguson to Edinburgh to train as an artist.  He was particularly successful at painting pen and ink portrait miniatures, and his work as a limner formed the basis of his living for the next twenty-five years.[2]

In 1739 Ferguson married Isabella Wilson, and he started to pursue his astronomical interests again.  He invented an instrument called the ‘Astronomical Rotula’ that had four rotating plates to show the positions of the sun and moon and to predict eclipses.[3]  Ferguson showed his invention to Colin McLaurin, Professor of Mathematics at Edinburgh, who was suitably impressed and arranged to have drawings of the device engraved upon copperplates.[4]  The plates were published and went through several impressions until 1753.  On a visit to Edinburgh, McLaurin invited Ferguson to look at his own orrery.  It had concealed, inaccessible wheel-work but Ferguson was still able to determine the necessary gearing for himself and set about making a fine wooden orrery.  LcLaurin was so delighted with the machine that he asked Ferguson to demonstrate and lecture on the orrery to his students at Edinburgh.  It would be the start of an outstanding career in public lecturing, eventually taking him to London where he lectured on a range of topics, including mechanics, horology, chronology, hydraulics, pneumatics, electricity and optics.  His passion for natural philosophy, combined with his clear explanations and well-constructed mechanical apparatus, ensured he was one of the most popular lecturers on scientific subjects at the time. 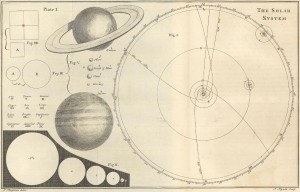 Ferguson produced a number of books during his lifetime, his most noted works being The use of a new orrery… (1746), Astronomy explained upon Sir Isaac Newton’s principles… (1756), Lectures on select subjects in mechanics… (1760), Tables and tracts: Relative to several arts and sciences (1767), The young gentleman and lady’s astronomy (1768), Select mechanical exercises… (1773) and The art of drawing in perspective… (1775).  Ferguson’s passion for clocks was evident in many of these books.  Most of them included designs for astronomical clocks which not only showed the time of day but also the day of the month, the phase of the moon, the position of the stars and occasionally the state of the tide.[5]  Once published, skilled clockmakers were able to use Ferguson’s detailed designs to build some of the finest examples of functioning timepieces.

As an inventor, lecturer, author and painter, Ferguson’s career was impressive – particularly because his vocations were largely self-taught.  Despite this lack of formal education, he was highly respected for his achievements.  He was an important figure in the development of orreries and similar astronomical devices, and was one of the academics who brought the new experimental philosophy and Newtonian astronomy to a popular audience in Britain in the eighteenth century.[6] 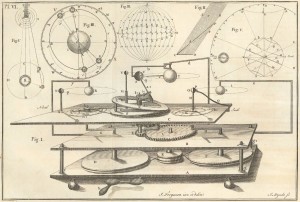 Astronomy explained upon Sir Isaac Newton’s principles… is a substantial publication with twenty-two chapters, including ‘A brief description of the solar system’; ‘The phenomena of the heavens as seen from different parts of the Earth’; ‘The physical causes of the motions of the planets’, ‘The method of finding the distances of the sun’; ‘Of the precision of the equinoxes’; ‘The moon’s surface mountains’; ‘Of the ebbing and flowing of the sea’; ‘Of the fixed stars’ and ‘Of the division of time’, amongst others.  The book also contains a number of fold-out plates, the engravings depicting, in intricate detail, Ferguson’s inventions, such as the Venus orrery.  Plates of the solar system, the paths of Mercury and Venus, the duration of moon-light at the Poles and the movement of the tides are also included.

The Library’s copy of Astronomy explained upon Sir Isaac Newton’s Principles… is the second edition, published in 1757.  It is available for reading in Rare Books & Special Collections at RB 520.2 F35a

For those interested in learning more about Isaac Newton, visit Isaac-Newton.info where his life and discoveries are discussed in detail. 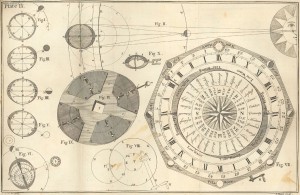 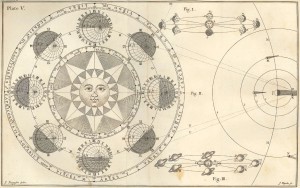 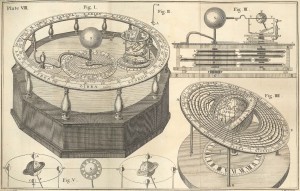 Astronomy explained upon Sir Isaac Newton’s principles, and made easy to those who have not studied mathematics. James Ferguson. 2nd edition. London: Printed for, and sold by the author, at the Globe, opposite Cecil-Street in the Strand. 1757

The Edinburgh encyclopaedia, conducted by David Brewster, L.L.D.F.R.S., with the assistance of gentlemen eminent in science and literature. Philadelphia: Joseph and Edward Parker, 1832, p. 30