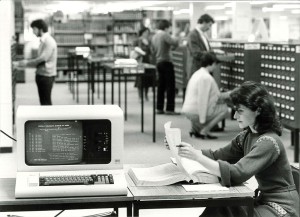 Tomorrow is the anniversary of the Barr Smith Library’s online bibliographic system, Biblion!

In 1979 it was recommended by the Select Committee on the Future Development of the Barr Smith Library that the Library should commence work on a project to develop an online catalogue. The library at the time had recently introduced high-density remote storage for library materials and the continuous relocation of books and periodicals was beginning to place a heavy burden on both library staff and users, particularly when it came to ensuring the card catalogues remained up to date with the changes. By the end of 1980, the first-stage of the development of Biblion had advanced, with brief catalogue records for 77,000 volumes (the entire Undergraduate collection) updated and accessible online. By July of 1981 Biblion contained records for 465,000 volumes and was being updated with 70,000 new volumes each year.

The Biblion terminal was periodically made available for testing by library users during the course of the project. The terminals were quite simple, displaying a menu which allowed users to search the catalogue by author, title, subject or call number. They could then browse the records alphabetically. 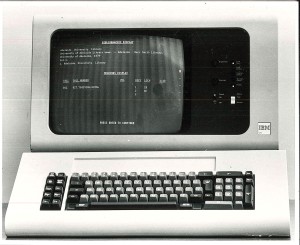 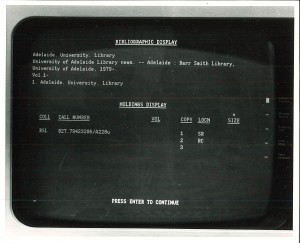 The first public access terminal was put out on level 3 of the library at 4 pm on Friday the 25th of February 1983. According to the reports, it was only thirty seconds later that the first customer was using it. When asked how she was doing she replied “Marvelous. I’ve never used a computer before, but it is so easy – look at all the reference I have found.”

Later reviews included:
“Better than using the catalogue; get more of them” and
“Fun! I like the fact that you can sit down.”

The card catalogue was gradually phased out over the years with the last official card produced for the card catalogue system ceremoniously filed by Vice-Chancellor Professor Donald Stranks in May of 1984. Two of the original Card Catalogue cabinets can be found in the Special Collections Reading Room on level 1 of the Barr Smith Library. 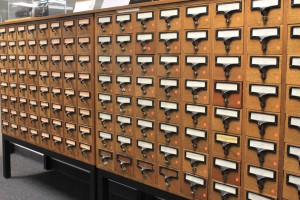 This entry was posted in Barr Smith Library and tagged History, Library Archives. Bookmark the permalink.