The art of distillation: Or, A treatise of the choicest spagyrical preparations, experiments, and curiosities, performed by way of distillation… by John French (1667) 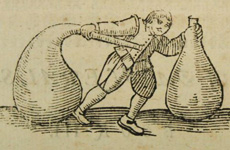 The physician John French was born at Broughton, Oxfordshire, in approximately 1616.  He entered New Inn Hall in 1633, one of Oxford University’s earliest medieval halls, and graduated with a Degree in Arts in 1637 and a Masters in 1640.  He pursued work in Great Britain’s Parliament army during the Civil War, eventually becoming one of only two physicians to the whole army, and was created Doctor of Physic in 1648. 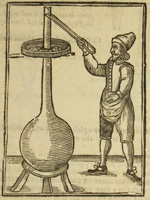 French was a follower of Paracelsus’ school of alchemy, which was critical of certain aspects of traditional alchemy.  He lived in an era when the new science of chemistry was developing, and he was keen to discover fresh medical uses for various chemicals and compounds.  His bias against Galenic medicine, with its underlying principle of humorism or the four humors – black bile, yellow bile, blood and phlegm – as advanced by the ancient Greeks, and which dominated Western medical science for more than 1300 years, is clear in his works.  In his 1654 publication, The York-shire spaw…, French explored the causes, virtues and uses of the ‘vitrioline’, ‘sulphur’, ‘petrifying’ and ‘Mugnus’ medicinal wells near Knaresborough, North Yorkshire.  The book is a fine example of French’s enthusiasm for new chemistry and its application to medicine. 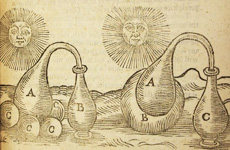 In approximately 1652, the first edition of French’s publication The art of distillation appeared.  Essentially a medical reference or handbook, it was considered representative of British chemistry of the period.  It was often referred to as the first definitive book on the subject of distillation, however suggestions that much of the book was merely translated from an earlier German work by Hieronymus Brunschwig have persisted.  Indeed, we know that French was a translator of numerous medical and alchemical treatises, including A new light of alchymie (1650), and that the publication timing of his own The art of distillation is coincidental to say the least – just two years after he’d translated German-Dutch alchemist, Johann Rudolf Glauber’s highly esteemed Furni Novi Philosophici into English.  Rattansi and Clericuzio certainly suggest in their 1994 publication, Alchemy and Chemistry in the 16th and 17th centuries, that French’s work was largely indebted to Glauber’s tracts. 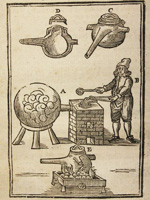 There have been other critics of French’s The art of distillation too.  In his 1692 book, Introitus apertus ad artem distillationis, or, The whole art of distillation practically stated…, William Y’Worth prefaces his text with an illustration of a distillery with the caption: “The Art of Distillation here behold, More perfect than before taught by tenfold.” He was clearly not impressed by French’s work and considered his instructions “defective, both in the exact Modus of working, the ordering of the wash and backs for a quick fermentation… as also in the great business of rectification.”[1]  However, French was renowned for his knowledge of chemistry, and the Irish modern chemist, Robert Boyle, known for his discovery of the pressure/volume relationship of gas (Boyle’s Law), was said to have greatly respected French and his Paracelsian beliefs.

The Library’s copy of The Art of Distillation (1667) is the second edition which is divided into eight separate “books” – essentially chapters on distillation, its three principle definitions, its methods, and the best furnaces and vessels to use in the process.  By far the most curious of chapters is number four, “Of animals”.  Here, the reader can find no less than 40 experiments which utilise human and animal organs, each said to offer medicinal relief for a variety of ailments.  Below are some of the more unusual experiments:

Elixir of Mummies is made thus.

“Take a Mummie (viz. of Mans-flesh hardened), cut small four ounces, Spirit of Wine terebinthinated ten ounces, put them into a glazed vessel, (three parts of four being empty) which set in Horse-dung to digest for the space of a month; then take it out and express it, let the expression be circulated a month, then let it run through Manica Hippocratis; then evaporate the Spirit, till that which remains in the bottom be like an Oyl, which is the true Elixir of Mummie.  This Elixir is wonderful preservative against all Infections, also very Balsamical.”

A Water and Oyl made out of Hair.

“Fill an earthen Retort with Hair cut small, set it over the fire, and fit a Receiver to it, and there will come over a very stinking Water and Oyl.  The Water and Oyl is used in Germany to be sprinkled upon fences and hedges, to keep wild and hurtful Cattle from coming to do harm in any place; for such is the stink of this Liquor that it doth affright them from coming to any place near it.”

To read French’s book and to discover more intriguing experiments, visit Rare Books & Special Collections where you will find The art of distillation at SR 660.4 F87 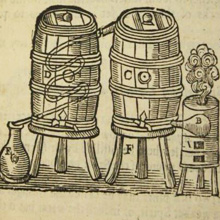 “The manner of distilling water in wooden vessels”. p.31 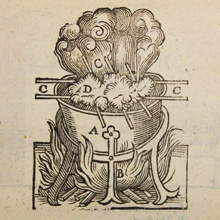 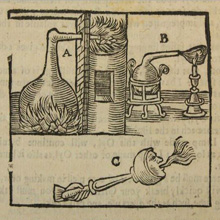 “A way to purge and purifie troubled and muddy waters”

The art of distillation: Or, A treatise of the choicest spagyrical preparations, experiements, and curiosities, performed by way of distillation. Together with the description of the choicest furnaces and vessels used by ancient and modern chymists. And the anatomy of gold and silver; with the chiefest preparations and curiosities thereof; together with their vertues. To which is added in this fourth impression. Sublimation and calcination: In two books. As also, The London-distiller, exactly and truly shewing the way (in words at length, and not in mysterious characters and figures) to draw all sorts of spirits and strong-waters; Together with their virtues, and other excellent waters. John French. London: Printed by E. Cotes for T. Williams at the Bible in Little-Britain, 1667.

[1] Introitus apertus ad artem distillationis, or, The whole art of distillation practically stated, and adorned with all the new modes of working now in use : in which is contained, the way of making spirits, aquavitae, artificial brandy, and their application to simple and complex waters in the exact pondus of the greater and lesser composition, as also many curious and profitable truths for the exalting of liquors, being the epitomy and marrow of the whole art, supplying all that is omitted in the London distiller, French and baker &​c., experience being the true polisher hereof : to which is added, the true and genuin way of preparing powers by three noble menstruums, sc. a purifiedisal armoniak, the volatile salt of tartar, and Sal Panaristos, through which they are exiled to an higher degree of perfection than any hitherto extant, together with their virtues and dose : illustrated with copper sculptures. W. Y-worth, London: Printed for Joh. Taylor, 1692.