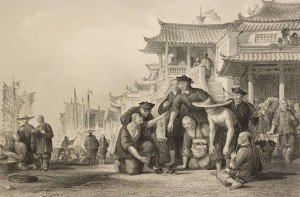 Arguably one of the most appealing pictorial books published during the mid-1800s, The Chinese Empire illustrated, (known also as China, its scenery, architecture, social habits &c. illustrated), truly is a remarkable book.  With 75 steel engravings, after the original sketches by Thomas Allom, and descriptive letter press by Irish clergyman, G.N. Wright, the book has a focus particularly rare for its time – on the life and daily activities of the Chinese people rather than the Country’s picturesque scenery.

English architect, artist and topographer, Thomas Allom, was born in Lambeth, South London, in 1804.  He initially pursued a career as an architect and began, in 1819, an apprenticeship with Francis Goodwin who was renowned for his church designs in the Gothic Revival style and civic buildings in the Neoclassical style.  Allom spent eight years with Goodwin, before studying architecture in 1828 at the Royal Academy Schools in London.  In the mid-1820s he exhibited some of his designs for churches and received considerable praise as an architect, affording him the opportunity to design buildings such as Christ Church in Highbury, the Church of St Peter’s in Notting Hill, the tower of St.Leodegarius Church near Nottingham and the William Brown Library in Liverpool.  He also designed workhouses in Kensington, Liverpool and Wiltshire, and collaborated with renowned English architect, Charles Barry, on projects such as the remodelling of Highclere Castle.  In 1834 he became a founding member of the Institute of Architects, now RIBA, and a fellow of the Institute in 1860.

Allom was as much an artist as an architect though, and he spent much of the 1820’s and 1830’s travelling through England and Scotland making a name for himself as a topographic illustrator.  He sketched his way around the Continent too, recording the architecture of countries such as Syria and Palestine.  In 1828, the extent of his travels broadened further, when he embarked on what would become a fifteen-year collaboration with Fisher Son & Co. to illustrate, with fellow artist William Henry Bartlett, many of the publisher’s Asian travel books.  That year the firm sent Allom to Turkey, where he produced hundreds of drawings, particularly in Anatolia, a great number of which were published as steel engravings in their Constantinople and the scenery of the seven churches of Asia Minor (Robert Walsh, 1838) and also in Character and costume in Turkey and Italy (Emily Reeve, 1840). 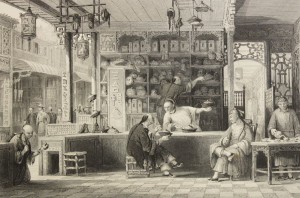 It’s clear the Near East, with its exotic buildings and monuments, was a tremendous source of inspiration for Allom.  Although documents relating to his time in Constantinople no longer exist, the sheer number of his drawings from the region suggest he spent considerable time there.  What’s less certain is whether Allom actually made his way to China, to pen all of the illustrations that appear in his four-volume set, China, its scenery, architecture, social habits, &c. illustrated (Fisher Son & Co., 1842).  Some sources suggest he did travel to the Far East but it’s generally believed that most of his Chinese illustrations are based on the works of other artists, rather than on his own firsthand views.  These artists include the likes of Lieutenant Frederick White of Britain and Captain James Stoddart of Scotland.  This is not to say, however, that Allom simply copied their works, rather that he saw and produced another version of them, in which architectural features appeared from different angles or where subjects performed different activities in the space.[1]

The Library’s copy of China, its scenery, architecture and social habits… is the third edition, published c1858.  Unlike the two earlier editions published by Fisher Son & Co. (1842) and Peter Jackson (1845), the London Printing and Publishing Co. edition features some additional illustrative plates from other artists.  Allom’s work is easily distinguished though.  His depictions of the country and seaside tend to have a romantic, almost dreamy, appearance, and his drawings of people going about their daily activities exhibit a similar idealised view of reality.  Despite this somewhat mystical view of China and its people, Allom’s work is incredibly important.  Until the early 19th century the western world really only had vague notions of Chinese culture.  Allom, through his exquisitely detailed drawings, was able to introduce the West to a view of China as comprehensive as possible in the mid-1800s.  Provided we understand and appreciate the mystical nature of his work, there is much knowledge to be gained about the customs, culture, dress, landscape, architecture and décor of China some 170 years ago.

China…, with its magnificent engravings of the Great Wall, Temple of Buddha and the Imperial Palace, together with more modest illustrations of merchant apartments, houses and places of business, is available for viewing in Rare Books & Special Collections at RB 915.1 A458c and RB 915.1 A458ce.

The Chinese empire: illustrated: being a series of views from original sketches, displaying the scenery, architecture, social habits, &c., of that ancient and exclusive nation / by Thomas Allom, esq., with historical and descriptive letterpress, by the Rev. G. N. Wright, M. A. The work will also contain a succinct account of the history of China; a narrative of British connexion with that nation, the opium war of 1840, and full details of the causes and events of the present war. Thomas Allom. G.N. Wright. The London Printing and Publishing Co. c1858